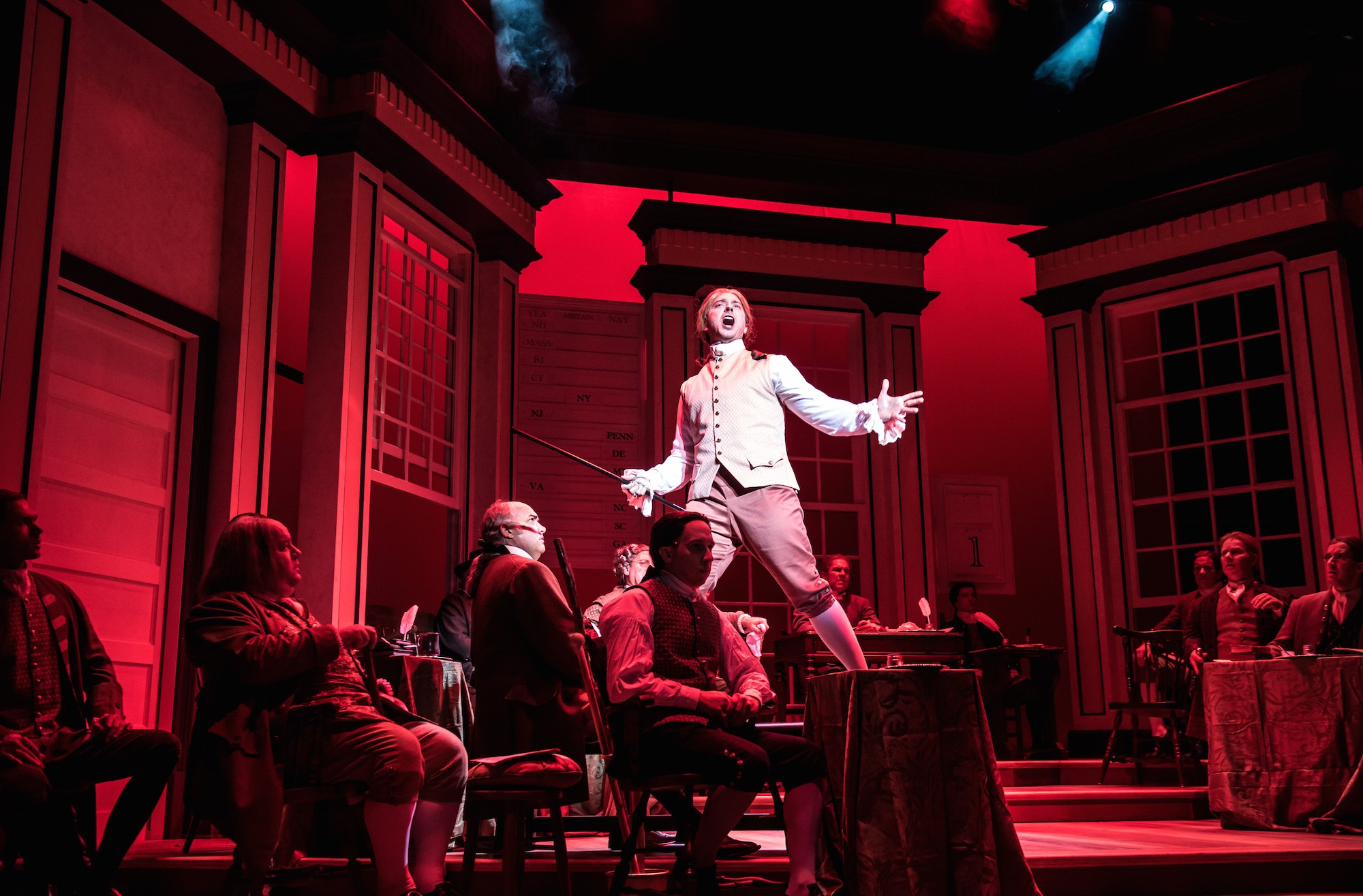 For local theatergoers, Alexander Sapp’s arrival in Richmond was like manna from the theater-making gods.

Starting with his first role as the comically furious Irish brother, Ray, in Henley Street Theatre’s 2013 production of “Beauty Queen of Leenane,” Sapp has been electrifying local stages with one great performance after another. His role in Virginia Rep’s “Mame” in 2014 revealed that he also had a great voice. Sapp brings those pipes to bear in the show-stopping second act song “Molasses to Rum” in Virginia Rep’s current blockbuster, “1776,” playing the pro-slavery South Carolinian, Edward Rutledge.

Fans have started asking him a question often leveled at talented local actors. “A few times people have come up and said, ‘You were great in that show; when are you leaving?’” says Sapp. What most folks don’t know is that Sapp has already made his run at fame in New York and doesn’t expect to go back anytime soon.

“I loved living up there, I had a great time,” he recalls. Sapp moved to New York after graduating with a degree in musical theater from Shenandoah University. “I lived there for 5 years but I never auditioned for anything. I used to beat myself up about that until eventually I thought, ‘maybe you just don’t want to do it.’ After that, the pressure was lifted off my shoulders.”

He returned to his hometown in Maryland before friends in Richmond suggested he should try his luck down here. “Science is my second passion so I thought I could go to school at VCU, maybe study ecology or aeronautical engineering,” Sapp says. “I tried to find a regular job but no one would hire me. I saw an audition notice for ‘Beauty Queen.’ Martin McDonagh is one of my favorite playwrights so I tried out. I got the part and, before the show opened, I had booked two more roles.”

Beyond finding work, Sapp also found he loved Richmond. “Leaving New York was like getting out of a serious relationship,” he says. “I was thinking all of those same things: no, it’s not you, it’s me; maybe we can just be friends, et cetera. Then it was like my friends introduced me to this lovely new lady; I really fell for this city.”

“I understand wanting to go to a bigger market, the idea of ‘making it,’” Sapp says. “But for a creative person, the most important thing is to be doing it, working at the craft. It’s kind of crazy how much theater is going on here. If I keep working, I can keep getting better and better.”

As Rutledge, Sapp has to spout very racist dialogue. “Some of the lines I have to say make Alexander the actor cringe,” he says. “But being racist isn’t a playable action. Rutledge wants what he thinks is good for South Carolina and he does everything he can to get it.”

His character is also a bit of a dandy and Sapp says in conversations with director Debra Clinton, they used animal metaphors a lot. “Rutledge is like a beautiful, deadly predator, a hawk or a panther or a spider. There’s an elegance to him, but when he strikes, he’s quite ruthless and violent.”

Running: There are still two more weekends to see Firehouse’s “Ubu 84” and Swift Creek Mill’s “Almost, Maine,” both closing the same weekend as “1776.”

On Deck: CAT (also known as Chamberlayne Actors Theatre) kicks of its season with the classic thriller “I’ll Be Back Before Midnight,” opening Oct. 14.