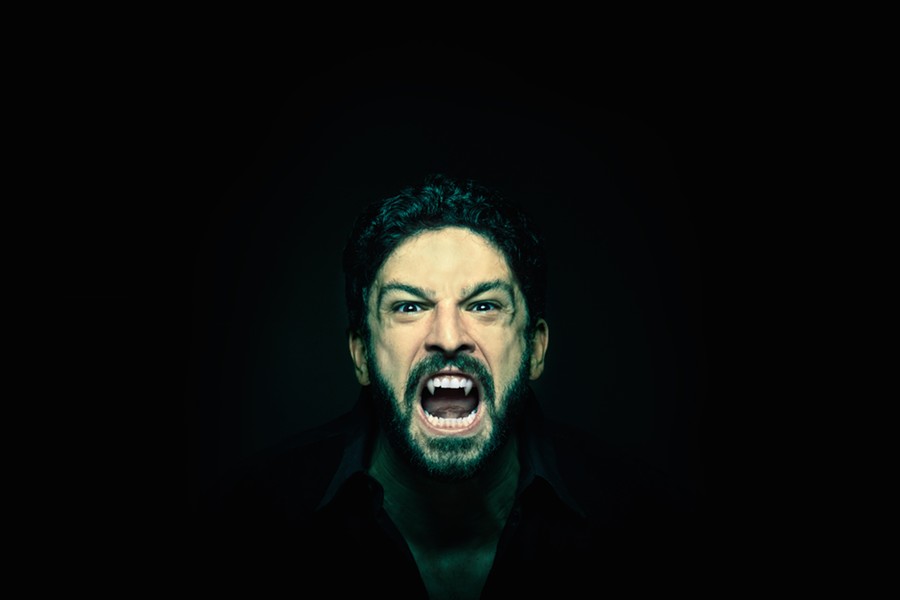 The course of love rarely runs smoothly. You might ask a girlfriend to marry you and have to wait more than 10 years for the answer. Or a mysterious stranger might turn your fiancé into a vampire.

Such are the scenarios posed by two stage productions that opened this weekend. The quirky, comedic “Almost, Maine” debuted at Swift Creek Mill in a Richmond premiere and Quill unveiled the stage adaptation of “Dracula” on the Gottwald stage at the Dominion Arts Center (also known as CenterStage). While one is a show you've likely never heard of and one is a story almost everyone knows, both productions explore different ways love can go awry.

To be fair, “Almost, Maine” also presents some of the ways love can go right. “It’s a mix of happy, funny, sad, and genuinely sweet moments,” explains Matt Hackman, one of the stars of the show. Instead of just telling one story, the play presents eight different vignettes that all take place at nine o’clock on the same night in a small town, each scene featuring different characters. “Some don't end in the happiest fashion,” says Hackman. “Others you may end up asking, ‘where will they go now?’”

Adding spice to the experience for Hackman: one of his co-stars is his wife, Louise Mason. The couple has worked in many shows in the past, co-starring in “The Little Lion” last season at the Mill, for instance. “As many shows as we’ve done, we haven’t shared much stage time,” says Hackman. “In ‘Lion,’ we never spoke to each other.”

That’s not the case in “Almost, Maine,” as they are play romantic partners in a few of the vignettes, including the marriage proposal with the extended gap between offer and answer. “It’s a scene where, at the end, some people will think ‘oh that’s sad,’ while others will go ‘that’s terrible!’” says Hackman.

“Dracula” is another story that garners a variety of reactions, a reality director Daniel Moore has been distinctly aware of. “The novel is fairly melodramatic and today we are an ironic people not predisposed to melodrama,” Moore says.

“While it’s a horrifying story, the question is ‘how do we make it scary?’” he continues. “I focused on the fear of being controlled by forces that can’t be controlled.” He says the love stories are also key. “You have two couples tossed into an extreme scenario,” Moore says. “What does that do to their relationships?”

Moore thinks his staging will have a lot of appeal for a modern audience. “The Gottwald is a contemporary, open space where I can break down the wall between the audience and the actors,” he says. “And there will be some spectacular special effects.” He's also cast a woman, Melissa Johnston Price, in the typically male role of vampire-hunter Van Helsing.

A director for nearly 40 years, Moore relishes bringing challenging stories to the stage. “I love the process of tearing a script down, finding the problems and figuring out ‘how do I bring this to life?’” he says. That may be an ironic sentiment when it comes to “Dracula,” but one that should result in an exciting stage experience.