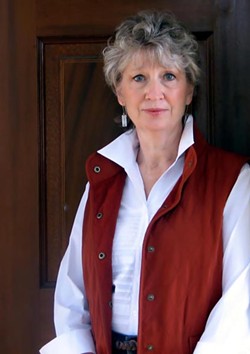 Every year, great books are published that languish on bookshelves across the country. In 2010 it looked like Virginian Kathleen Grissom’s debut, “The Kitchen House” (Touchstone), might do the same.

But an initial small printing had to be repeated many times over in years to come, as the book slowly became a best seller, largely through word-of-mouth and book clubs.

“I just kept talking to book clubs because they were asking if I’d speak with them,” Grissom says. “And then one person has a friend in Colorado or a sister in California. That’s the way it spread.”

The book followed Livinia McCarten, an Irish indentured servant, and the slaves and masters of an 18th century Virginia plantation. “I was so happy people wanted to talk about it. They were talking about my family and they loved my family.”

The family is her characters, and many are back for her follow-up novel, “Glory Over Everything” (Simon & Schuster). Grissom had another novel in the works when “one of the characters from ‘The Kitchen House’ blocked me and told me I had to write about him next.”

It was Jamie Pyke, who has run from the plantation and established himself in Philadelphia. A plea for help from an old friend takes him back south and threatens to expose his past.

Like her first book, “Glory Over Everything” doesn’t shy from the era’s realities, and is fast-paced, chock full of vivid characters. “They came to me fully formed, and I followed behind with my pencil,” Grissom says.

She’s not neglecting the books clubs this time around either. “I’m so grateful to them. They seem to be just as happy to be involved in Jamie’s family as they were in Lavinia’s.”

The Canadian native has lived in Virginia for 23 years, in a restored plantation tavern outside Lynchburg that helped inspire her first book.

Grissom will be at North Courthouse Road Library in Chesterfield County on Friday, Aug. 5. Copies of both books will be available for purchase.