A few last-minute notes on the summer theater season. 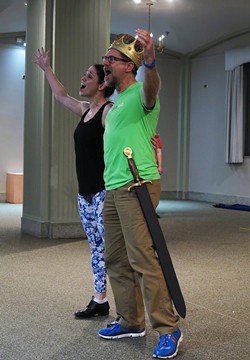 Richmond’s pro theater season is wrapping up with no new shows opening until September, so Footlights will be going dark until after Labor Day. While this column will be on hiatus, there will still be plenty of action on local stages. Not only are several summer hits running into August, but also all sorts of entertaining and inventive one-offs will be attempting to lure patrons out of the heat.

Do you like your musicals without so much pesky plot between the songs? You might want to check out the “Where New Lives Cabaret” at the Firehouse Theatre tomorrow night, Aug. 1. A lineup of local luminaries will be singing contemporary musical theater hits. Those expecting “Anything Goes” be forewarned: This crowd skews more “Hamilton” than “1776.”

The Dogwood Dell Festival of the Arts opened “Spamalot” over the weekend. The hysterical stage version of the Monty Python movie continues tonight and next weekend. The best part? It’s free -- you needn’t even bring a shrubbery.

I’ve never read one of David L. Robbins’ books, but the local author has made all sorts of inroads in the local theater scene since his “Scorched Earth” had its world premiere at the Barksdale in 2012. This week, Robbins will direct staged readings “MASH” episodes -- the television show, not the movie -- in cooperation with 5th Wall Theatre Company and Richmond Triangle Players. The performances will benefit his Might Pen Project, an initiative that offers writing courses to veterans, helping them to develop their storytelling skills to better share their experiences with the world. Performances start Aug. 4 and all the details are available on the theater’s website.

Just when we’ve reached the point in the summer when little kids are sick of the pool and done with camps, the Ashland Theatre Festival offers the perfect distraction: a daylong theater extravaganza. Richmond’s neighbor to the north is the home of the Whistle Stop Theatre Company, an all-volunteer troupe that stages original variations on classic tales. Titles for the Aug. 13 festival include “Peter Pan: When Wendy Grew Up” and “Beauty and the Beast Tamer.” Details are on the Whistle Stop website.

The latest Broadway revival of the epic musical “Les Miserables” is closing soon. Local “Les Mis” lovers don’t have to steal any crusts of bread -- or piles of dough -- for transport to New York to get a Jean Valjean fix, however. Jewish Family Theatre will be presenting “Les Miserables -- School Edition” at the Firehouse Theatre starting Aug. 23 and closing Sept. 4, the same day the curtain closes on the Broadway revival.

A huge flurry of activity kicks off the 2016-’17 season with three shows opening Sept. 15. Footlights will be back a week in advance to preview the action.

Running: There’s one last performance of Quill’s “The Merchant of Venice” tonight at 7:30pm. The lights go down on TheatreLab’s “Mr. Burns: A Post-Electric Play” on Aug. 5 while Virginia Rep’s “Dreamgirls” stop dreaming Aug. 7. Stupidity is no excuse to miss “American Idiot” at the Firehouse: it’s been extended to Aug. 13. Virginia Rep has the long-runner in the bunch: “Brighton Beach Memoirs” shines until Aug. 28.