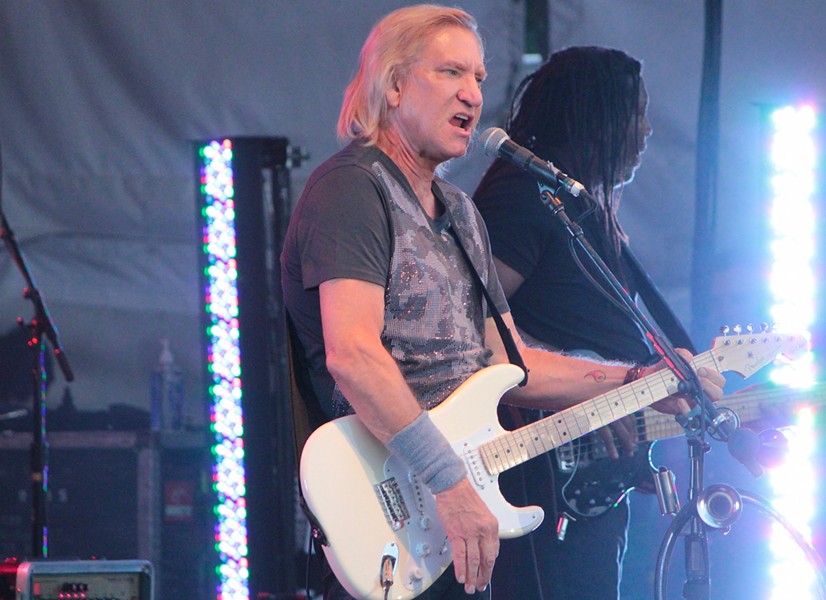 Joe Walsh knows where his bread is buttered.

The classic rock guitarist took to the stage on a warm summer Thursday night at Innsbrook before a large, graying crowd looking for FM rock nostalgia. And Walsh, of the James Gang and Eagles fame, delivered the goods playing an energetic set filled with hits from each phase of his 40-year career.

Walsh opened with a raucous James Gang classic, “Walk Away,” quickly followed by the jammed-out, lifestyle statement, “Analog Man” the title track from his 2012 album. His band then delivered a flawless cover of Sly and the Family Stone’s “Everyday People” a soulful summer song that felt inspired in today’s climate of racial and social unrest.

Constantly switching guitars between songs, Walsh broke out his acoustic for an ode to recently departed Eagle, Glenn Frey. The weepy ballad “Take it to the Limit” seemed to move the crowd – to where I have no idea - but his back-up singers shined. This was really the only ballad of the night, the rest was sheer power rock starting with “Turn to Stone,” oddly featuring images of Hillary Clinton and Bernie Sanders obscured by flames on the large projection screen behind the band. I’m not sure what that meant, but Walsh said later he was “glad we weren’t in Cleveland” (he nixed a performance there last week after he learned it was part of the GOP convention).

At age 68, Walsh’s singing voice still has some power left -- quitting his regular boatload of cocaine years ago surely must've helped. He hit some high notes, struggled or avoided others, and his speaking voice had an odd affect, like a drunken gremlin chewing tobacco.

He mentioned that he had been river rafting on the James the day before, which drew loud cheers. "This next one is for your beautiful city,” he said before delivering a solid take on his 1979 soundtrack number “In the City” -- made famous by the gloriously cheese-ball gangland movie, “The Warriors.”

My only complaint came during the song, “Funk#49” which features one of the most recognizable, and singularly awesome guitar riffs in rock history. Weirdly, Walsh interrupted the James Gang classic midway to allow some sort of strange, electronic dance party onstage, where numerous people came out and danced to generic club music. The effect was jarring, like breaking into a Czech polka during the national anthem.

Had the dancers been dressed as chimps in space suits, I might've enjoyed that episode a little more. Instead we got members of the folksy opening band, JD and the Straight Shot, led by James Dolan, a billionaire who owns Madison Square Garden among other things. Earlier, their SNL-drummer said it was "great to be in West Virginia," then blamed his classic faux pas on "the acid kicking in."

True to form, Walsh closed things out with three of his most well-known hits: the sardonic “Life’s Been Good,” his biggest Eagles hit, “Life in the Fast Lane,” and finally an encore performance of the rousing FM staple, “Rocky Mountain Way” from 1973, featuring the requisite talk-box solo.

If you’re unfamiliar, this is where a plastic tube runs next to his microphone and into his mouth, allowing him to reroute his guitar signal and shape the frequency through vocalizing for a kind of wah-wah effect; he even added a little “Purple Haze” riff in the solo for good measure.

It kind of looked like a crazy old man who had pulled his catheter out and was sucking his own bodily fluid onstage – but it sounded a whole lot better that that, thankfully.