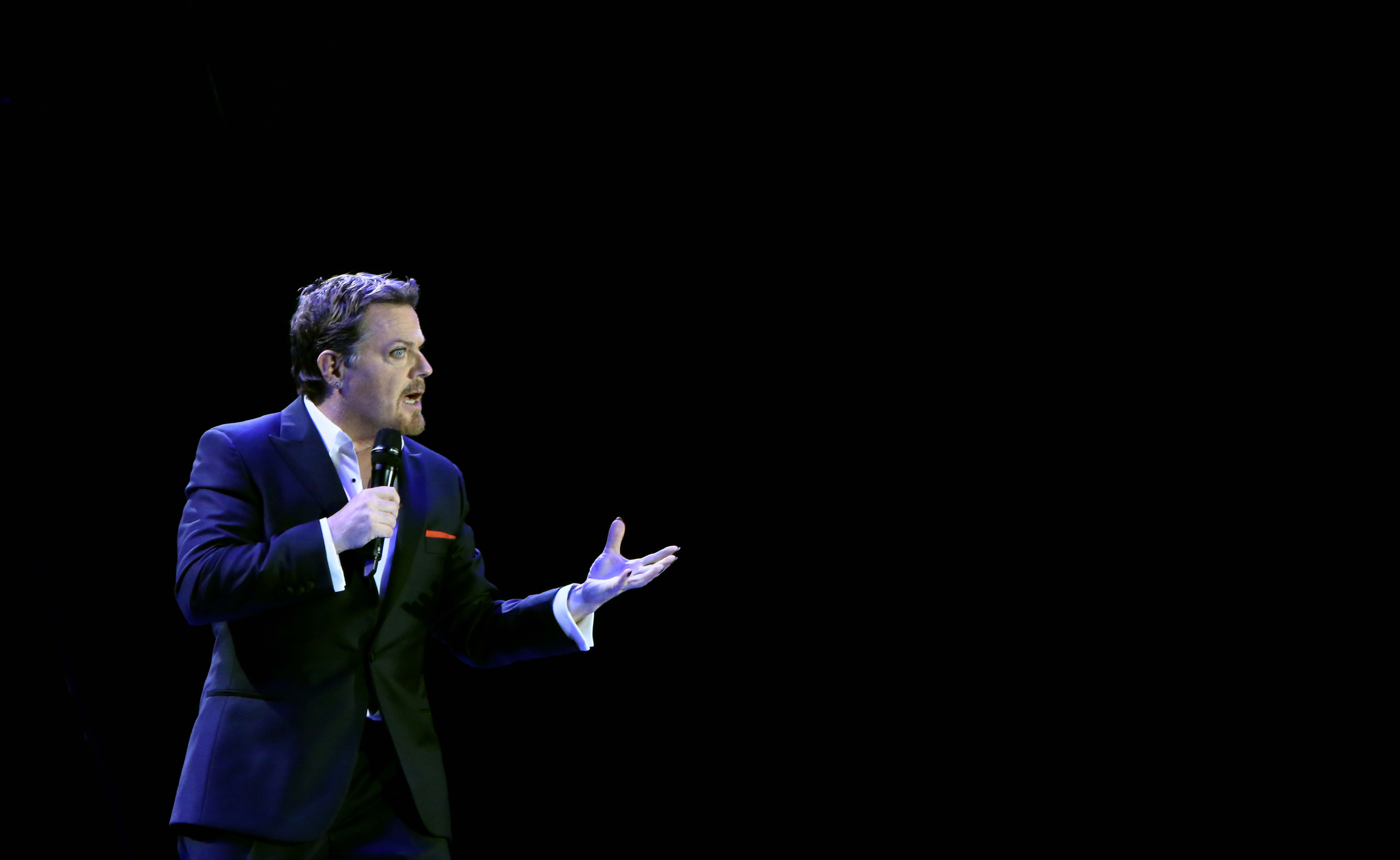 There’s no doubt Eddie Izzard is a world-class comedian.

The guy can deliver jokes in multiple languages with ease. He's a smart, physical performer with a flare for madcap tangents, displaying an engaging and inquisitive personality onstage.

On Monday night in Richmond, the cross-dressing Brit burst onstage, tossing a cane aside, wearing a fine suit with candy apple red lipstick and matching fingernail polish. His big showbiz intro screams that he's on another level; a Wembley arena comic using a shock-and-awe affect pioneered, if I'm not mistaken, by Eddie Murphy on his mid-'80s concert film, "Raw."

But Izzard's epic Force Majeure tour, which has visited 28 countries over the past three years before landing at the packed Carpenter Theater, still could use some fine-tuning, strangely. At least if he wants its brand of cerebral, sometimes surreal humor to pack a more memorable punch at key moments.

That’s not to say he didn't deliver brilliant sketches. The Emmy-winning comedian and actor, who spent the night moving, dancing and breaking into song, has the manic comic energy of Robin Williams had he been a transgender member of Monty Python rather than an alien named Mork. Yet the steadily enjoyable, two-hour plus show began to feel like a loose accumulation of zany riffs that grew self-indulgent toward the end. By then, it was as if Izzard was delivering a clinic to an audience he assumed aloud was comprised of “some of the most intelligent people in the area.”

Rather this seemed like a show for long-time fans. The crowd remained firmly in his corner, cheering wildly throughout. If you expected more insightful connections from a comedic mind that skips nonchalantly through history, religion, mythology -- someone who has performed this show in French and German -- you might have left wondering if he needs fresh inspiration.

Things kicked off with a barnstorming first set, during which he cleverly and repeatedly broached the fourth wall, delivering bits on the Magna Carta and a hilarious physical sketch with Martin Luther nailing his famous treatises to the church door in high winds. A reoccurring bit with the French phrase “et voila!” (always good "when you throw up on the head of a child") delivered laughs, as did his re-enactment of Caesar's murder, wherein his last words are really less of a sigh and more "make a salad out of me!" Garnish with a goofy chicken-hawk impersonation of Roman general Marc Antony, sounding like a chicken. [Side note: you can tell Izzard is a bit of a sci-fi geek, with references to “Star Wars,” “Game of Thrones” and “Lord of the Rings” peppered throughout.]

Unfortunately, the second set was more superfluous, like an extended encore of weaker material. Rarely did Izzard delve into his personal background with the exception a rambling story about what happened after he was caught shoplifting make-up as a teenager and discovered his stepmother had a past in an elite British paramilitary group. The show might've felt more vital had he revealed more of himself, or at least included some tension.

He came closest to this, in Virginia, with his thoughts on religion, noting that he did not believe in God partly because the deity with the big bellowing voice didn't show up at major disasters. Some might argue heroism and acts of kindness fit the bill. But as Izzard noted, he believes in humans. Especially one named Steve, apparently.

A hilarious later bit occurred when Izzard took on the equestrian sport of dressage, using his physical gifts to imitate what appeared to be a drunken animal and rider, sidestepping awkwardly like a newborn giraffe. He then had them step through an invisible window to commit acts of petty larceny, just to increase the reality-television viability.

To simply recount Izzard’s punch lines doesn’t do them justice. His is a multi-cultural comedy of the imagination. Like that talented school kid who can impersonate anyone and carry on intricate conversations between a roomful of imaginary people. Izzard is the polished adult version, post-liberal arts education.

Here's a recent interview with him from London Real:

Surprisingly, there wasn't an extended bit on Brexit, nor did he take on American values and culture as much as I expected, stopping merely to drop in a “don’t vote for Trump” or two. Fascism can happen again was his point. Oh, how we forget things, even history. Missed opportunities seemed to abound.

His only reflection on Richmond was a few light jabs at the humidity (unlike Robin Williams, who delivered opening sharp barbs around Civil War history, managing to work in Monument Ave, Windsor Farms, and the Mosque). As my friend noted, maybe Izzard was simply less interested with being American-centric -- which in its own way, would be refreshing.

It remained a joy to watch his delivery; his bilingual skill used to lampoon the absurdity and playfulness of language (ever thought about the pronunciation of bough, cough, and dough? He has -- it doesn't make any sense). Izzard proved a master at bobbing and weaving, dropping numerous threads and picking them up later in random sketches.

I've only seen him live once, but it seemed like the "comedic-genius" tag was not unfounded. I can’t wait to see what he does next with a set of fresh, all-new material.

By this point, I bet neither can he.