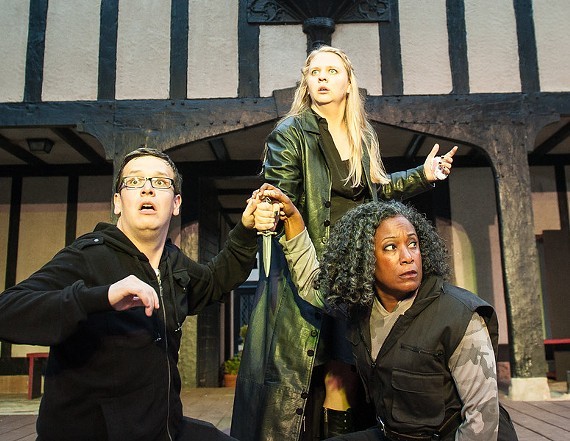 During his dozen years working in Richmond professional theater, Thomas Cunningham has played such characters as Simple in “Merry Wives of Windsor” and the Fool in “King Lear.” He’s played the easily duped, bombastic manservant Malvolio twice, most recently in Quill Theatre’s hit production of “Twelfth Night,” which closed last month. But if you think his skill at playing comic-relief characters means Cunningham himself is a dimwit, you should scan his doctoral dissertation, “Examining Phoneme Bias and Mediation through Constructed Language.” Clearly Cunningham, who’s set to receive his doctorate next spring -- is a very smart cookie.

As the head of voice and speech at Virginia Commonwealth University, Cunningham teaches such courses as graduate voice pedagogy and acting with archetypes. But he’s no stuffy intellectual, and finds an invigorating synergy between his academic and onstage vocations.

“They really feed and support each other,” Cunningham says. “Teaching it helps me do it, which helps me teach it. I can experience something on stage and then bring it back and tell 34 college students about it.” It’s apparent that his students appreciate his approach, giving him a perfect 5.0 at RateMyProfessors.com.

Cunningham says he was a shy kid growing up in Petersburg, but that changed when he cavalierly chose theater as an elective at the Maggie Walker Governor’s School. “We were reading the play ‘Blythe Spirit’ out loud in class,” he recalls. “I started doing my lines and kids started laughing, and I was doomed from that moment on.”

In his junior year, he scored a role in “Two Gentleman of Verona,” appearing alongside his “Twelfth Night” co-star Liz Blake White, and he’s been hooked on Shakespeare ever since. His sensitivity to how voice and speech are used makes him particularly adept at performing the language for modern audiences.

“I understand the fear audiences have of Shakespeare,” he says. “You need to do anything you can to welcome them into the text, reminding them that, even with the weird syntax and all, it’s just English. It’s not even Old English, just English.”

Fans of Cunningham, like me, appreciate the intensity he brings to his roles, whether it’s the unhinged titular monarch in “King John” or the blowhard Malvolio.

“I like characters where something is broken inside them,” he says. “They’re trying their best but something is not quite working. For an actor, it’s an exercise in empathy.” After earning his bachelor’s and master’s degrees at VCU and with his dissertation defense on the horizon, Cunningham is contemplating life beyond Richmond.

“I’ve sent applications around to other parts of the country and I’m keeping my options open,” he says. “I’ve found nothing but opportunity [in Richmond]. It will always be home, and the great thing about home is that you can always come back.”

Cunningham appears as Launcelot Gobbo in Quill’s “The Merchant of Venice,” which opened this weekend and runs through July 31.

Running: The curtain comes down on Richmond Triangle Theatre’s “The Boy from Oz” on July 16 while the Firehouse Theatre’s “American Idiot” continues through July 23. The Firehouse also has two short-timers going, a series of monologues, “Through Their Eyes,” and the musical “Seven Brides for Seven Brothers.” Check out firehousetheatre.org for details. Summer girl power continues with Swift Creek Mill’s “The Hallelujah Girls” closing July 23 and Virginia Repertory Theatre’s “Dreamgirls” on August 7.