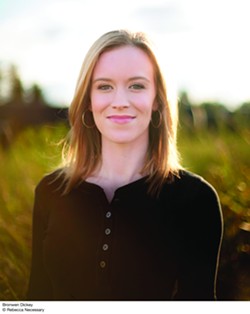 Chop Suey Books will be featuring Durham editor and author Bronwen Dickey reading from her new book "Pit Bull: The Battle Over an American Icon" on Thursday, June 23, from 6 to 7 p.m.

The New York Times called the book “a thoroughly comprehensible tour of genetics and behavioral science,” explaining “why breeding never guarantees an individual dog’s personality, and shouldn’t be used to condemn it.” Dickey is a contributing editor at the Oxford American, as well as the daughter of James Dickey, who wrote the novel “Deliverance” and won a National Book Award for his poetry.

But during a reading last week at the Regulator Bookshop in Durham, Dickey was heckled by an aggressive, anti-pitbull guy and things clearly got out of hand; she had to be escorted by police out of the store.

According to the Raleigh News & Observer, "an anonymous Facebook group called Pit Bulls and Amputees posted a picture of Dickey’s house online, writing, “What famous author's home do you think this might be? That's right! It's Bronwen Dickey's residence.” Another anonymous message, posted earlier, warned, “We will destroy her.” Dickey filed a harassment report with Durham police."

Now apparently that same protester, or others possibly, are turning their sights on Chop Suey in Carytown, according to owner Ward Tefft.

Tefft took to Facebook to express his surprise after hearing that the Richmond talk at his store may be targeted.

Of all of the wild things that we've done at Chop Suey Books, I'm surprised that it is a reading with Bronwen Dickey, author of "Pit Bull: The Battle Over an American Icon," that threatens to draw the protesters.

We've been getting anonymous emails and letters indicating that the anti-pit bull people that harassed Bronwen in Durham have their eyes on the reading that will happen here on Thursday, June 23 at 6 pm.

If you think that an objective study of the history of pit bulls that both recognizes cases of their aggression while positing that all pits are not evil and that the breed should not be destroyed deserves to be heard over the clamor of those who would like to eradicate this breed, please come out to support Bronwen.

Tefft told Style they are not planning on any extra security, but Ring Dog Rescue will have friends who are police officers who will be present as guests and audience members.

"We're not having security come out," he says, noting that he's been getting a bunch of anonymous e-mails, but still isn't sure whether protesters will show up. "The protesters sent me a flyer with skewed data saying that pitbulls will attack you during normal everyday things such as reading the Bible and taking down Christmas trees, or opening car doors, reaching for TV remotes."

The Chop Suey event on June 23 is sponsored by Ring Dog Rescue. It is free and open to the public and Dickey will be signing copies.

From Chop Suey's webpage description of the event:

When Bronwen Dickey brought her new dog home, she saw no traces of the infamous viciousness in her affectionate, timid pit bull. Which made her wonder: how had the breed—beloved by Teddy Roosevelt, Helen Keller, TV's "Little Rascals"—come to be known as a brutal fighter. Her search for answers takes her from nineteenth-century New York City dogfighting pits—the cruelty of which helped spark the founding of the ASPCA—to early twentieth-century movie sets where pit bulls cavorted with Fatty Arbuckle and Buster Keaton; from the battlefields of Gettysburg and the Marne, where mascot pit bulls inspired American troops, to desolate urban neighborhoods where the dogs were brutalized. Whether through love or fear, hatred or devotion, humans are bound to the history of the pit bull. With unfailing thoughtfulness, compassion, and a firm grasp of scientific fact, Dickey offers us a clear-eyed portrait of this extraordinary breed, and an insightful view of Americans' relationship with their dogs.