Kudos to Jennifer Frank Clevenger, a valuable player on the local theater scene. 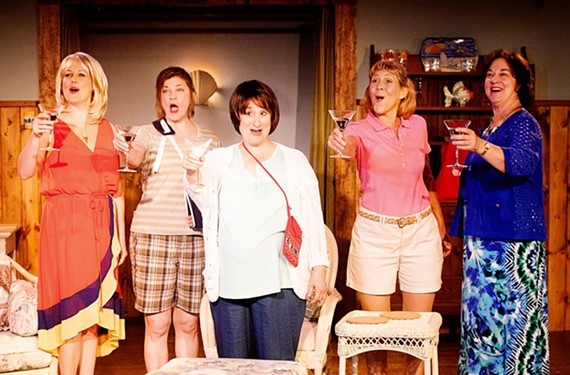 I don’t like using sports metaphors when describing theater, but sometimes they can't be avoided.

In baseball, "utility infielder" refers to a player who may not be a big star but whose ability to do well in a variety of positions makes them vital to the team. Over the past couple of decades in Richmond, Jennifer Frank Clevenger has epitomized that term, playing key roles in everything from Shakespearean tragedies to the campiest of comedies, and she's currently one of the stars of Swift Creek Mill's breezy summer romp, "The Hallelujah Girls."

"Girls" is another "southern ladies" comedy from Jessie Jones, Nicholas Hope, and Jamie Wooten, the playwriting team of that created "Dixie Swim Club." That bittersweet comedy was so popular for the Mill in 2014 they revived it last summer with the same cast. Four of the leads in that production, including Clevenger, will be starring in "Girls." "We had no idea how popular 'Swim Club' was going to be," recalls Clevenger, "but then groups of women would come back again and again. They'd tell us, 'these characters are so similar to my friends growing up.'"

In "Swim Club," Clevenger gained accolades -- and a Best Supporting Actress nomination from the Richmond Theatre Critics Circle (RTCC) -- for throwing herself into the physically demanding role of accident-prone Vernadette. "Actors work from different places," she says. "Some come from their heads, others from their hearts. I work from my body; I'm a movement-first person." Clevenger honed her physical adeptness doing improvisational comedy. She spent years as a member of the Take 5 Comedy Troupe founded by her husband, Jeff, another local stage fave and last year’s Best Supporting Actor according to the RTCC thanks to his turn as Polonius in Quill’s “Hamlet.”

Clevenger’s passion for acting started in the third grade. She convinced her teacher to stage a production of “Hansel & Gretel” as a star vehicle for herself as Hansel. When the multipurpose room exploded with laughter at her first joke, she was hooked. “It was intoxicating,” she says. After earning her Master of Fine Arts in Theatre at Catholic University, Clevenger came to Richmond like so many young actors do to work in Virginia Rep’s educational touring program. She met her husband-to-be a short time later while working at Mystery Dinner Theatre, a now-defunct company that was the training ground for many of Richmond’s favorite comic actors.

In the intervening years, Clevenger has played roles like Ben Affleck in Richmond Triangle Players’ “Matt and Ben,” Lady Constance in Richmond Shakespeare’s “King John,” and the widow Kristine in Henley Street’s “A Doll’s House.” In RTP’s campy “5 Lesbians Eating a Quiche,” her versatility allowed her to be funny while also having the gravitas to deliver a stirring “embrace your lesbian identity” speech during a key turning point.

For now, Clevenger is happy to be part of crafting what she calls “comfort food for the theater.” “These playwrights have really strong sitcom sensibilities,” she says. “People come to these shows because they like to laugh.” Sounds like another home run (sorry) for the Mill.

Running: Quill’s “Twelfth Night” continues another fortnight until June 26 and “The Hallelujah Girls” runs through July 23.

On Deck: On June 16, RTP will open “The Boy From Oz,” a bio-musical about Peter Allen, the small-town Australian boy discovered by Judy Garland and later married to Liza Minnelli.