Interview: the Rev. Billy of the Church of Stop Shopping

New York activist to read at Fountain Bookstore on Thursday. 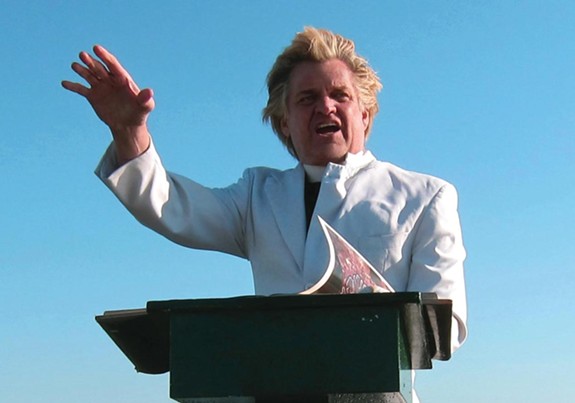 Dearly beloved, we are gathered here today to break the spell.

If you’ve never heard of the Rev. Billy and the Church of Stop Shopping, it’s perfectly understandable. Many of us lead busy lives.

We don’t have time to stage a mass exorcism of Victoria’s Secret cash registers, sing songs such as “Monsanto is the Devil” between cars in traffic jams in the Holland Tunnel or join a cellphone opera.

Rather we stare endlessly at our cellphones, self-promoting and sharing photos of our lives as they happen instead of living in the moment, always remaining glued to our endless stream of handheld information, society’s new TV before it goes into under-the-skin implant form.

That we happily embrace our technological chains in the guise of convenience, more options and knowledge is what the Rev. Billy would decry as the great Orwellian irony at the heart of our fundamentalist consumer culture.

For the past 15 years, the Rev. Billy has been attempting to jolt us from our trance with his televangelist-styled antics and gospel musical performance. Based in New York, the Reverend is the de facto leader of a radical Earth-centered community with 50 performing members who live together and travel the world singing and preaching anti-consumerist gospel. By his count, Billy has been arrested 70 times, many of those coming during Occupy Wall Street.

His Stop Shopping gospel choir has opened for Neil Young on the aging rocker’s anti-Monsanto tour, as well as appeared “in 20 or 30 documentaries,” most famously in Morgan Spurlock’s “What Would Jesus Buy?”

The Rev. will be making his first stop in Richmond this Thursday evening which will involve a solo reading at Fountain Bookstore from his new book, “Earth Wants You” – a hodgepodge of “expressive trespassing, science fiction, singing activism, non-god Bible-like stories with Earth replacing the patriarch . . . to soul-shake us into conjuring a new story for ourselves.”

He laments that the Fiery Eagles of Justice, his backing band, did not get into his Chevy Malibu for the trip down this time. Instead, we talked to him during part of his ride down the ugly Northeast corridor of foul factories and pollutants.

Style Weekly: So Reverend, you just missed the opening of the big new Wegman’s here. It was a sight to behold. Millions of slack-jawed faces, eyes wide open for the Second Coming, slowly pushing carts into the promised land of grocery nirvana.

Reverend: That, brother Brent, is where the Rev. Billy gets arrested.

I didn’t get to read your book, but glancing through it, wouldn’t the sort of unchecked capitalism that America has been perfecting be your church’s true devil?

Consumerism is our devil. And militarism has now overlapped with consumerism. How we become less than citizens as a result of a bombardment by marketing. We consider that the fundamentalist church of our culture, with a very strict police system, a very narrow choreography in terms of our gestures, thoughts, our dreams.

We bring to people a way to improve lives through music and humor and joy. Facing down fundamentalism. Every one in our choir is in recovery from one fundamentalism or another: Hindu, Islam, Jews, Baptists, Catholics, I’m a recovering Dutch Calvinist from Holland, Michigan. Hallelujah!

We think consumerism is the great Orwellian fundamentalist church right now. We’ve got to break this hypnosis, we’re not responding to the earth’s crisis in a realistic way. We’ve had seven record months in a row. I could recite a litany of evidence [regarding global warming]. We think we should be on schedule to be radical Americans again right now – as we were with labor, civil rights, peace, women, gender, all the remarkable social revolutions. But we’re not doing it this time, we’re not rising up. And this time it’s deadly. ...

What do you think about the next generation of protesters?

I don’t know. Sometimes I feel younger people coming up are free to avail themselves of justice issues more quickly than previous generations. Other times, I don’t feel their presence so much. I’ve only been in a couple protests where millennials were there in force. One, there was like 10,000 people in New York City, this was regarding Edward Snowden and Julian Assange. The protest was instigated by revelations involving the NSA ... that invasion of privacy, of our First Amendment, that occasioned an enormous parade in New York City. These people were without suntans. They were 25 years old, the New York startup workers and people who work for digital companies. They were out in force ... sort of wonderfully languid and hip, but they were fierce in their belief. I ended up giving long sermons – they didn’t seem to know I was kind of a show. We walked through the heart of downtown Manhattan from Union Street and I preached at both ends.

But every generation has its own cultural architecture and each has special freedoms and special psychological limitations. Right now, all generations, all races, all genders, we all have to get together. We’re not doing that. We’re being kept in our demography, our marketing dish. Part of that is the privatizing of public space. Part of it is the digitizing of protest, which has had a terrible impact. As soon as protest is not physical, not sensuous, then you’re imprisoned in this world of [nongovernmental organizations] where all you have to do is click a petition and you’re done for the day. That’s had a stalling impact on any kind of realistic response to the Earth’s crisis.

A big part of it is the way our days are scheduled. Constantly commuting. Constantly disembodied. The causes of the Earth’s crisis are also the causes of our alienation from one another, our loneliness, our breakdown of community. Consumer society is both the cause and the effect.

You guys are a little similar to the Yes Men – using pranks to make people think.

We are always compared to them and Code Pink. ... Our 35-voice choir is an artistic endeavor. We’re a touring artistic company. We are trying to entertain, to design shock, make results, to break into that consumer age. But yes, Andy and Mike from the Yes Men are close friends. ... Something that has happened to us in recent years is that we’ve discovered that living together is at the heart of our work.

We’re in the five boroughs and Jersey and some of us have been together the whole time, a large number just within the last six or seven years. When you add in musicians, fellow travelers, the lawyers – we have a whole battery of long-suffering pro-bono lawyers – there’s an outer community of 100 and an inner community of 40 or 50.

We’ve fallen in love and out of love with each other, we’ve had babies, we’ve died and buried each other, we are a community – and a church that has retired the patriarch. We pray to life. We find that our belief, our faith, our politics, the courage that it takes to be in activism comes from this complicated warmth between us. ... I think Code Pink has that more.

And how do you pay for everything?

We’re supported by 1,300 small donors and a small number of wealthier people who give us more money. We’re a little like a miniature version of the Bernie campaign.

But our job is cultural, to break the consensual hypnosis of consumerism. ... I ran for mayor on Green Party ticket in 2009 against Mike Bloomberg, and the choir and I have introduced Ralph Nader back in the day. We sometimes have an emcee role.

I think we have moved into a kind of [do-it-yourself] spirituality, and doing so I think we become less easily understood by the people who surround politicians. The people that have supported us are people like Kurt Vonnegut, Joan Baez, Laurie Anderson, Neil Young, Darryl Hannah. ... When we go into the back aisle of a Wal-Mart or a J.P. Morgan Chase lobby, or a Monsanto lab and start singing or handing out info – we’re trespassers. We believe all social movements that have had success do this. So that’s a little different than politics.

Tell me about what you’re working on now?

Well, our early devils were Wal-Mart, Disney, Starbucks – but now we’re mostly opposing Monsanto, they kind of wrap up all of our devils, all the campaigns. They are a consumer sales company with Round-Up right on the big box shelves. Oh! And we just drove by an enormous Dow chemical plant. Monsanto is also a military company, the inventor of Agent Orange, they’re cruel to animals with bovine growth hormones, the herbicides and pesticides involved in genetic engineering of crops. ... Our current campaign that we’re putting most of our resources into, Brent, we’re trying to map all the glyphosate spray in the country [It's the main toxin in Round-Up]. We’ve filed [freedom of information} requests with jurisdictions all across the country and so far have done five cities.

That toxin has been linked to cancer, birth defects, endocrine destruction, autism and infertility. And they’re spraying this in our parks across the country despite the World Health Organization saying that it causes cancer in human beings.

The parks department is going broke and they’re chemicalizing their operations. They’re firing park workers so they replace manual labor with chemicals ... and it has to stop.