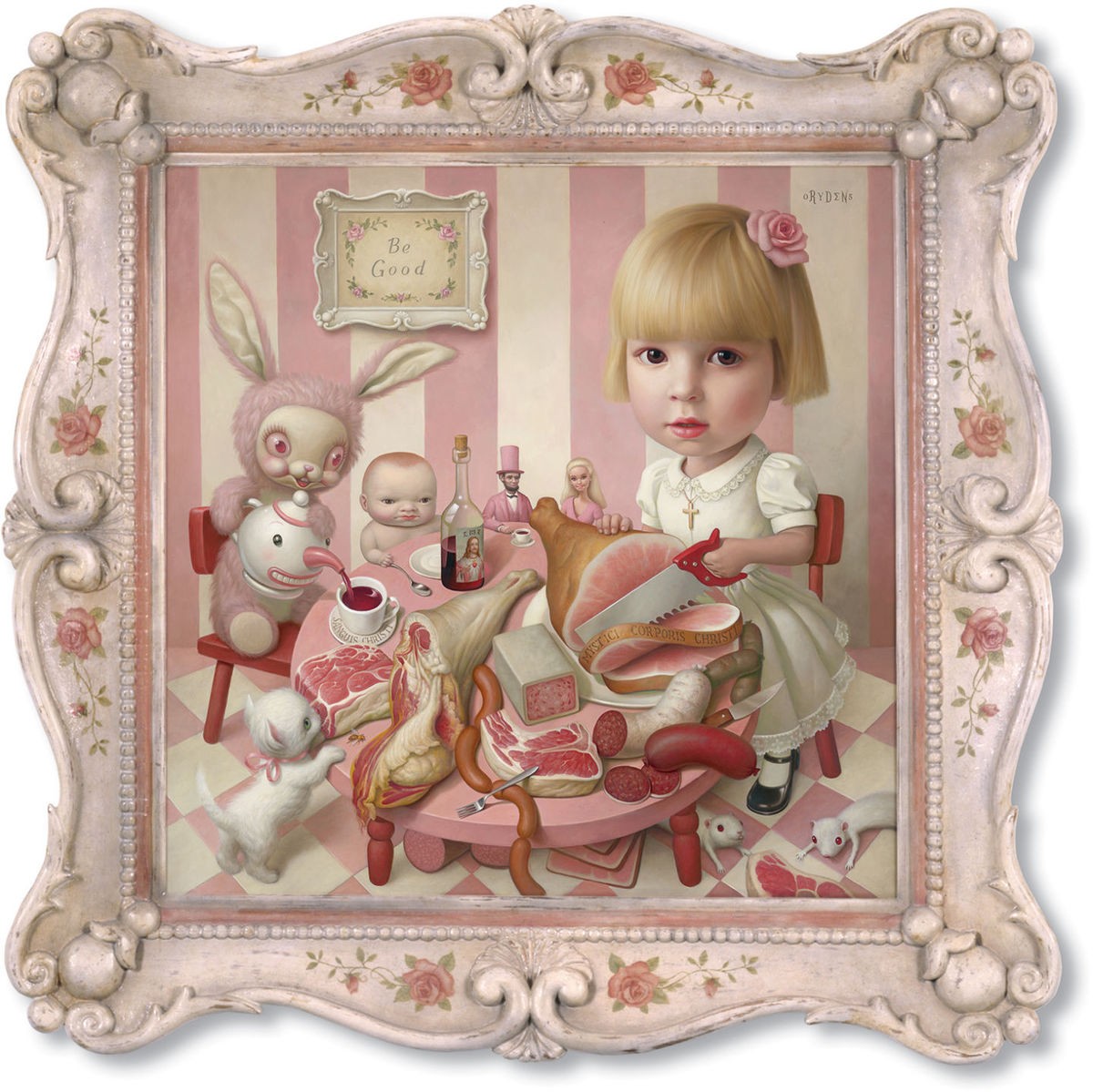 A local controversy over a painting with religious imagery that’s going on display at the Virginia Museum of Contemporary Art has received national attention.

Late Wednesday, the museum stood by the exhibit.

The work, called “Rosie’s Tea Party,” was painted by Mark Ryden. It depicts a girl wearing a cross necklace and a First Communion dress, sitting at a table strewn with meat. The girl is sawing at a ham that is inscribed with “Mystici Corporis Christi,” Latin for “mystical body of Christ.” Rats are eyeing a piece of meat that has fallen to the floor. A bottle of wine with a label that appears to depict Jesus sits on the table. A rabbit is pouring what appears to be blood from a teapot.

This weekend, the Beach museum will open its biggest exhibition to date with work from Hi-Fructose, a California-based magazine. The publication, which is released quarterly, is marking its 10th anniversary by bringing some work to Virginia Beach. The touring exhibition will be on display until the end of the year.

On Tuesday, The Virginian-Pilot published an opinion piece by columnist Kerry Dougherty that reported that two members of the Virginia Beach Arts and Humanities Commission – Ben Loyola and Brian Kirwin – were offended by the painting. The commission contributes grant money to the museum. Loyola questioned whether the artwork should be subsidized with taxpayers’ money, and Kirwin told Dougherty that he would consider slashing future funding for the museum.

On Wednesday, Bill Donohue, president of the Catholic League, wrote a letter to museum Director Debi Gray about the artwork. The organization is the largest Catholic civil rights organization in the U.S.

Donohue suggested the following in his letter:

“Why not substitute a young Muslim girl in a hijab, wearing a machete around her neck, cutting a piece of ham with the words, ‘Allahu Akbar’ inscribed on it. In place of Jesus in the wine bottle, display a picture of Muhammad. And yes, please keep the blood.

When Muslims complain, tell them that ‘Art is intended to be controversial,’ and ‘Someone ought to poke fun at those Muslims anyway.’ Please be sure to let me know the outcome.”

Dot Greene, museum spokeswoman, issued a statement Wednesday on the museum’s behalf that said the public can work with and learn from the art and artists in the Hi-Fructose exhibition. She said creating dialogue about contemporary art speaks to the museum’s mission, which is to stimulate critical thinking and dialogue throughout Hampton Roads. Greene also said the museum is working to develop a program to discuss art censorship.

“The works this institution exhibits may awe, illuminate, challenge, unsettle, provoke and, at times, offend,” Greene said. “We defend the freedom to create content and exhibit such work anywhere in the world, and we recognize the privilege of living in a country where creating, exhibiting, and experiencing such work is a constitutional right protected under the First Amendment.”

This article originally appeared in the Virginian-Pilot yesterday.