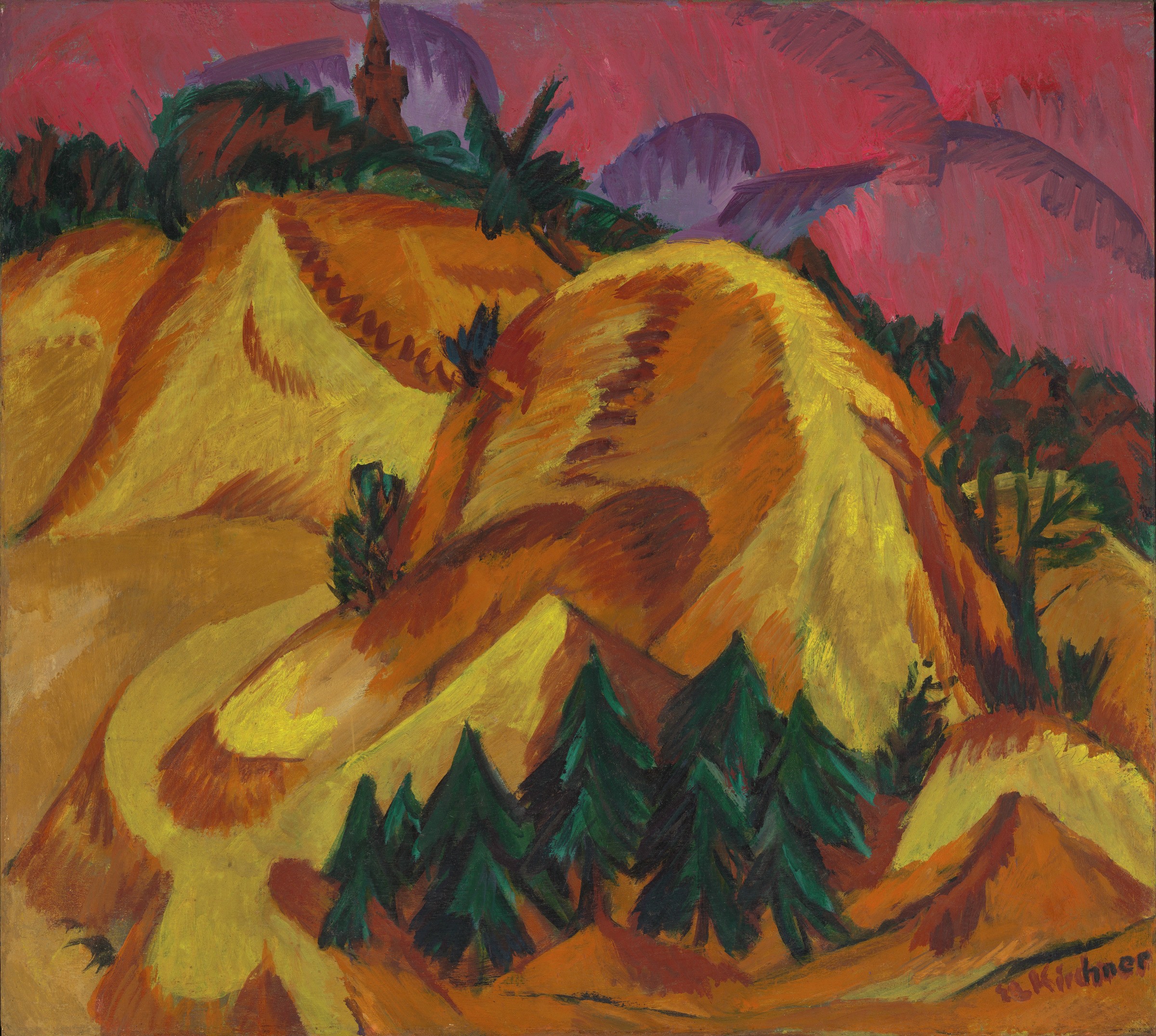 Last November, the Wall Street Journal broke a story about a German Expressionist art work restituted at MOMA in New York that had been entangled in a 10-year-legal battle to return the work to its rightful owner, the Ludwig and Rosy Fischer Collection.

That family has gifted the majority of its art collection here at the VFMA. And after some legal assistance from the VMFA, this new "gift-purchase" has now come home.

The painting, "Sand Hills in Grünau" by Ernst Ludwig Kirchner (1880-1938), is currently on display at the museum. Not surprisingly, it has a long and eventful history.

"It was huge news because it was part of Nazi loot from when the Fischers fled Germany. It had been in MOMA and the family kind of thought it belonged to them, then later discovered the title had been changed at the auction where MOMA bought it in the 1940s," explains Pryor Green, interim chief communications officer at VMFA. "Turns out it was part of their grandparents' collection and MOMA gave them the art back. And they have given it to us."

It is rare for an art museum to give up its work, she says, even though the VMFA has restituted work that was returned back to Native American tribes in the past.

"But it's extremely rare to have a museum restitute art and have it then go into another museum," Green says. "They spent ten years trying to track down the information . . . and eventually found these postcards in the family's collection that identified [the scene]."

The museum doesn't comment on the value of the piece as policy, but called it "a generous gift/purchase agreement with both the family and the museum’s Glasgow endowment." The Times Dispatch reports the painting as valued in the low seven figures on the open market.

You can read some more details of the long tale per the press release from VMFA:

A major painting by German Expressionist artist Ernst Ludwig Kirchner (1880–1938), which the Museum of Modern Art (MoMA) in New York recently returned to the family of its rightful owner, has been reunited with works from the Ludwig and Rosy Fischer Collection at the Virginia Museum of Fine Arts in Richmond.

Sand Hills in Grünau was at the center of a 10-year restitution case that sought to prove MoMA’s painting had once been owned by the son of Ludwig and Rosy Fischer under a different title. Its journey from Frankfurt, Germany, in the 1920s to VMFA today involves the family’s dedication and support of Kirchner and other German Expressionist artists, Nazi-era confiscation of “degenerate” art, provenance research, and a postcard.

Ludwig and Rosy Fischer were forward-thinking collectors in Frankfurt, Germany, who collected German Expressionism between 1905 and 1925. Their sons, Ernst and Max, inherited the collection of approximately 500 works in 1926. After the Nazis gained power in Germany, Ernst left the country in 1934 and eventually settled in Richmond, Va., with his half of the collection. When Max left the following year, he was able to take only a few works out of Germany, and the rest were presumed lost, stolen, or destroyed by the Nazis. However, members of the Fischer family have long wondered if some of these works had made their way into private collections or were sold.

In 1949, MoMA acquired a Kirchner painting from the Weyhe Gallery in New York. The work, then titled Dunes at Fehmarn and dated 1912, was presumed to portray a German island, one of the primary sites where Kirchner painted. In 1967, MoMA changed the title to Sand Hills in Engadine and the date to 1917–18, based on the advice of a Kirchner scholar, Donald Gordon, who thought the painting depicted a Swiss landscape in an area that Kirchner moved to during the final years of World War I.

Decades later, the lawyer representing the Fischer family, David Rowland, argued that the painting belonged to Max Fischer. Due to the confusion over titles and dates, it was not immediately clear that this was a work Max Fischer owned before he left Germany. Through provenance research and a historical postcard of the dunes near Grünau, it was concluded that the painting was of an area outside of Berlin, where Kirchner also was known to paint. After determining that a painting titled Sand Hills in Grünau was listed in the original records of Ludwig and Rosy Fischer’s collection, MoMA agreed that it mostly likely belonged to Max Fischer. Upon returning the painting to his surviving heirs—Eva Fischer Marx and George Fischer—in November 2015, MoMA produced an extensive document that outlines the history of the painting and the reasons for returning it to the Fischer family.

Before news of the restitution was announced, the Fischer family informed VMFA that they wished to reunite the painting with approximately 200 other works of German Expressionist art that their mother, Anne Fischer, had given the museum through a gift/purchase agreement in 2009. The painting, now titled Sand Hills in Grünau and dated 1913, corresponds with the list Rosy Fischer made of her collection around 1925. Additionally, Anne Fischer’s son, George, and his wife, Marylou, donated Emil Nolde’s South Seas Landscape to VMFA in 2014, one of the few paintings Max Fischer was able to bring with him to America.

“Having grown up in a home surrounded by these vivid works of art, it was a natural decision to send Sand Hills in Grünau to join the Ludwig and Rosy Fischer Collection at the Virginia Museum of Fine Arts,” Eva Marx said. “By reuniting this work with the rest of the collection, we honor our grandparents’ vision and our parents’ dedication to sharing these works with the public.” Director Alex Nyerges said: “The painting is a vibrant example of Kirchner’s landscape painting and adds significantly to our collection of Die Brücke works. The Virginia Museum of Fine Arts is honored to have Sand Hills in Grünau and to continue the stewardship of Ludwig and Rosy Fischer’s extraordinary collection of German art.”

History of the Ludwig and Rosy Fischer Collection at VMFA Ludwig and Rosy Fischer acquired examples of German Expressionism between 1905 and 1925 and their collection included works by artists who were key figures in the Die Brücke movement: Max Beckmann, Peter August Böckstiegel, Otto Dix, Conrad Felixmüeller, Erich Heckel, Ernst Ludwig Kirchner, and Emil Nolde. Die Brücke (“the Bridge”) was a pivotal movement within German Expressionism, comprised of artists who responded subjectively to the changing world around them. Their style was defined by vivid colors, strong lines, and distorted forms—characteristics that have come to symbolize German Expressionism as a whole.

The Fischer’s collection was divided evenly between their sons, and after Ernst and his wife, Anne, left Germany and settled in Richmond, Virginia, their half of the collection was preserved for more than 70 years in their home. In 2009, the Fischer Collection became the last refugee collection of German Expressionism to enter a U.S. museum when it was acquired by VMFA through a gift-purchase agreement with Ernst’s widow, Anne Fischer.