After June, a lot of musicians will need a new building to call home. 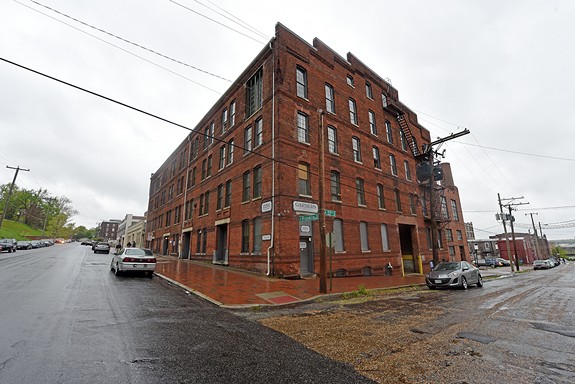 For years, the building at 2201 E. Franklin Street has been a popular and affordable location for local bands to rent monthly as practice space.

But a recently posted note by the owner is asking tenants to vacate the building by the end of June in what is being described as a major blow for the local music scene.

The building’s owner, Carl Otto, posted the note on a door announcing the sale of the building and the move of his Garber Door Company, stating that he had petitioned the city for a change of zoning.

In the note [see below] he writes that the building no longer suits his company's purposes, nor does it fit the master plan for the area. He adds that he is trying to simplify his life in old age.

At least 100 bands have played in the spacious and legendary building, according to one local musician. Some of the well-known groups that have used the spot include: Bio Ritmo, White Laces, Hot Dolphin, Mikrowaves, Lady God, Snowy Owls, the Diamond Center and the Ar-Kaics among many.

As the news spread via social media, at least one commenter noted that Otto should be considered a "local hero" for offering affordable rent for as long as he did. Also there were no time restrictions for practice schedules, which was "huge" according to one local musician.

Other commenters saw it as an unfortunate consequence of gentrification, with "hot" building locations such as this one rising in value.

Lindsey Spurrier, lead vocalist for Hot Dolphin, says that there were seven different bands sharing her space alone -- and "Garber's" as it's known, has four floors.

"It's going to displace a ton of musicians," she says. "It's really hit the music community hard. The silver lining is that it's started the conversation for musicians to get involved in the music community in a greater capacity. Struggle always brings people closer together."

A group page has already formed on Facebook called CORDS! The Committee on Richmond DIY Spaces and says: "This group will be a meeting point for people who are trying to meet to forge new DIY practice/work spaces for music and arts following the great garbers diaspora that is impending."

Marty Key, a musician and the owner of Steady Sounds Records, used the space for practice and says he is worried there will be no comparable space for bands to rent within the city, adding that at least one nationally renowned local metal group was already looking in Chesterfield.

Marlysse Simmons, keyboardist with Bio Ritmo, says her band had been there for eight years and now is not sure what they'll do.

"We've used that space for tons of photo shoots, music videos and of course lots of late-night practices. I knew it wouldn't last forever but [it's] still terrible," she says. "I know there is a huge lack of practice spaces for bands. People are always asking me about options, now I'll be the one asking around. If I had the energy, money and backing I'd find some old warehouse and rent it out to bands. There are tons of 'artist' spaces but none that really work for music that might be louder than acoustic level. I was just thinking the other day, wouldn't it be cool if the city arts funds and larger corporations -- profit and non-profits -- put more money into the live music scene like they do the art scene, subsidize some practice and performance spaces? That'd be awesome, but yeah, I know that's not happening."