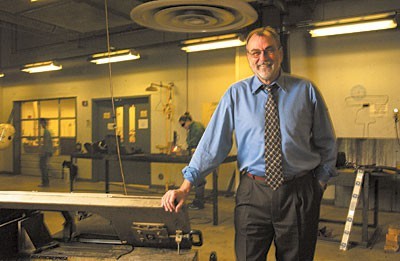 He has served for the past five years as the dean of the School of the Arts and a press release was sent out announcing his retirement on June 30, 2016.

"My biggest joy over the last 42 years has been following the amazing creative careers that our students have undertaken," Seipel says. "They have proven that a degree from VCuarts can open doors they never thought were in their grasp. The list of successful professional artists, performers, scholars, teachers and designers that have passed through this magical place is quite astounding -- thanks to the dedicated faculty and staff who really are the ones who make that magic happen."

In 2011, Style conducted an interview with Seipel when he took on the job and he mentioned that his biggest dream was to see the Institute for Contemporary Art become a reality. It is currently under construction.

From the school's press release:

“Joe’s leadership has made VCU a creative campus,” said VCU President Michael Rao. “From the support he galvanized to raise funds for the Institute for Contemporary Art to the dynamic, cross-disciplinary connections and innovative programs he has initiated across campus, Joe has been instrumental in positioning the School of the Arts as a global, forward-thinking institution.”

Seipel has led VCUarts to its top rankings, expanding the school’s programs and facilities. This month, the school’s graduate fine arts programs were ranked number two in the country by U.S. News & World Report’s peer assessment survey, just behind Yale University. Once again, VCUarts was ranked the number one public fine arts program in the U.S.

Seipel has grown the school’s programs in arts research and entrepreneurship, championing opportunities for interdisciplinary partnerships, connecting the School of the Arts to the VCU Medical campus and areas of business and technology. He transformed the Depot Building on Broad Street, providing over 26,000 square feet of creative, collaborative working space for students, faculty, and the community.

He has ensured that VCUarts drives cutting-edge arts and design opportunities at home and abroad. Seipel played a pivotal role in raising funds—over $34M—for VCU’s new Institute for Contemporary Art, currently under construction at the corner of downtown Richmond’s Belvidere and Broad Streets. On the international scene, Seipel helped negotiate a 10-year contract with the Qatar Foundation to operate VCUQatar, a fully accredited branch campus of VCUarts. He has negotiated exchange agreements with arts and design schools in Finland, India, Israel and Korea.

“To have been able to play a part in transforming the lives of hundreds of students who have come through this institution has been a gift of immeasurable scale,” says Seipel. “It has been an incredible journey, and one that has been life fulfilling.”

Seipel, who began his career in higher education with a one-year contract at VCU in 1974, served as chair of the Department of Sculpture for 17 years, and as the VCUarts senior associate dean and director of graduate studies for eight years. He was appointed dean of the School of the Arts in the spring of 2011.

He received the Award for Distinguished Service in 1999 from both the School of the Arts and Virginia Commonwealth University. He was honored for his lifetime achievements in sculpture education in 2001, when he received the International Sculpture Center’s Sculpture Educators Award.

Deeply dedicated to the Richmond community, Seipel served on the Urban Design Committee for the City of Richmond, on an early advisory team for the Children’s Museum, on the Performing Arts Center’s Downtown Richmond Public Arts Committee, on the board of directors for the Virginia Center for the Creative Arts, and was the founding president of the 1708 Gallery. He was a founding board member of The River City Bank, which started in Mechanicsville, Va. He also co-owned the popular Texas Wisconsin Border Café in Richmond for 17 years.

Seipel received his Bachelor of Science degree in Art from the University of Wisconsin, Madison, and his Master of Fine Arts degree from Maryland Institute’s Rinehart School of Sculpture.

A national search will be conducted to find Seipel’s successor.