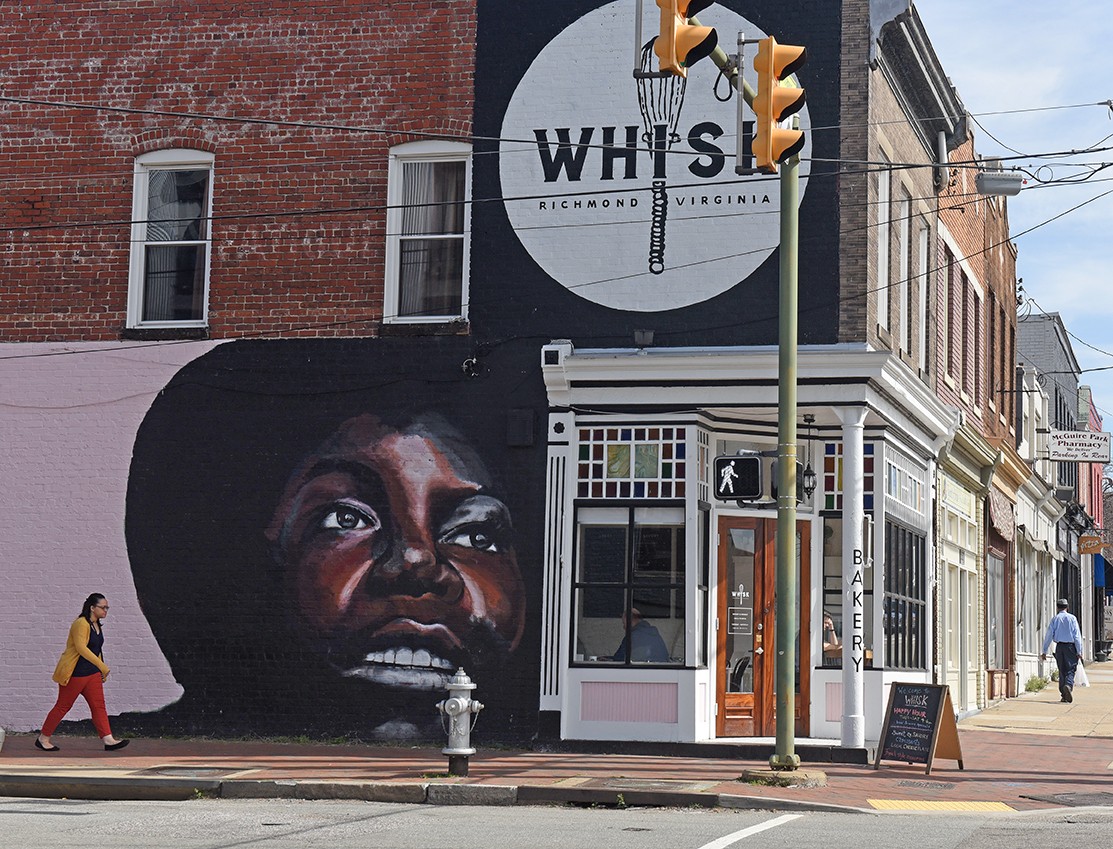 Whisk Bakery brings not only sweet treats and a re-purposed building to Shockoe Bottom, but also new life to the neighborhood’s public art.

Bakery owner Morgan Botwinick and Richmond’s most well-known muralist, Ed Trask, teamed up to repair and update an eight-year-old mural of Nina Simone. When the business opened in the fall, Trask returned to overhaul his original piece on the side of the building.

If you drive by 2100 E. Main St., you’ve probably seen a smiling Simone with pearly white teeth, rich brown skin and an Afro. She’s surrounded by a background of soft pink, a color that’s a central part of Whisk’s motif.

It’s a new look for the piece, which Trask originally painted in 2008 for the previous business in the building, GlobeHopper Coffeehouse & Lounge.

The image of Simone was surrounded by a neon green background, and the brown skin tones had faded to black in the sunlight. But Trask says that the fading wasn’t necessarily a bad thing, and it reminds him of the monochrome photos on the covers of Blue Note jazz records.

Trask painted the original piece for GlobeHopper co-owner Erin Helland, who also was a fan of Simone’s, in exchange for an unlimited supply of free coffee.

“I get paid to do murals all over … but half of what I do is community-based and free,” Trask says. “[Murals] are something that change your outlook when you’re at a stoplight waiting. It takes you to a different place.”

After GlobeHopper closed in early 2015, Botwinick opened Whisk in October. Trask inquired about the future of his work, and struck up the same coffee-for-life deal. They agreed on a facelift that fit the new business and kept the integrity of the piece.

Botwinick says that she’s glad the piece is staying around with a new twist.

“I think that it’s more dynamic in color,” she says. “I was definitely happy with the updates. … It feels more connected to the business.”

Trask says he’s relieved that the piece lives on, but he’s not so fond of the pink.

“Pink’s not my favorite color, but I don’t own the business and do branding,” Trask says, joking. “But if I had to do pink to keep the mural I would.”

The re-branded Nina Simone is the third time Trask has left his mark on the building. Before GlobeHopper, a photo studio occupied the building, which was emblazoned with a geometric and abstract mural.