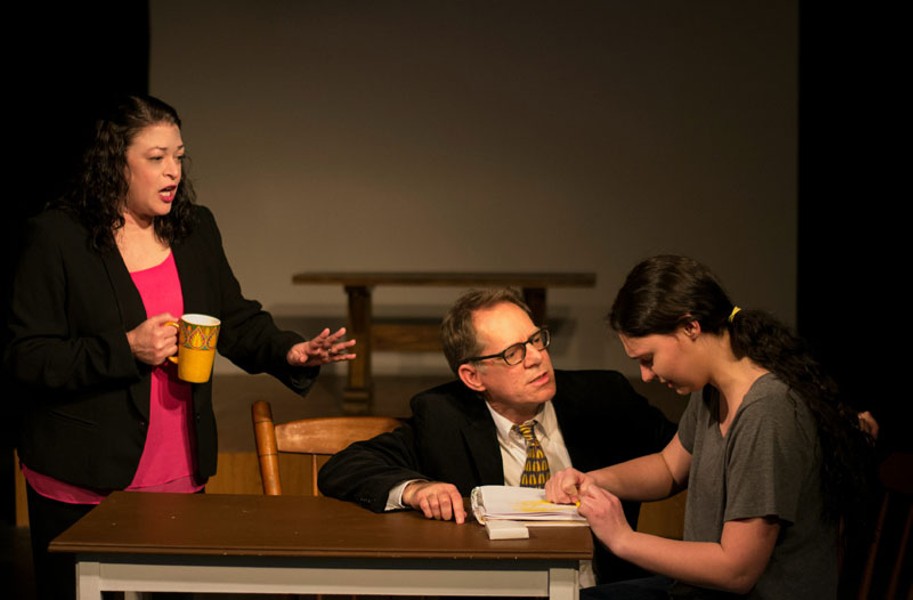 Many productions in the Richmond Acts of Faith theater festival approach big theological questions obliquely, almost sneaking them in the side door so as not to distract from the principle drama. Not “Creating Claire,” which opened this weekend at HatTheatre. It uses the idea of creationism as the nexus of its story.

When Claire, a tour guide at the Museum of Earth and Sky, deviates from her script to hint that a divine architect may have created the universe, her co-workers and husband are baffled. The actress charged with creating the character of Claire is Jill Bari Steinberg, a Richmond favorite whose personal spiritual journey began with a father who’s been a rabbi in Portsmouth for 35 years.

While her beliefs might not match Claire’s, Steinberg says the process of staging the play has expanded her perspective. “I’m pretty solid in what I believe and I might have just rolled my eyes at some of this stuff in the past,” Steinberg says. “But now I have more compassion for how certain types of personalities might make sense of things.”

The changes in Claire’s faith are motivated in part by her relationship with her autistic teenage daughter. That aspect of the character resonated with Steinberg, whose marriage last summer brought a preteen stepson into her life, a change that made her feel more confident about taking maternal roles.

“I felt a little like a phony playing a parent before now,” she says. “Having a child forces you to be a grown-up in ways I didn’t expect.”

Steinberg says that while people may not understand Claire, she hopes that people find her sympathetic: “She’s trying to make sense of a situation she doesn’t have any control over. In those cases, people use what they need to use to get through their lives.”

Steinberg hasn’t performed in a main-stage, starring role since Henley Street’s “The Beauty Queen of Leenane” in 2013. If you want to catch her, you’ll need to act fast: “Creating Claire” closes next weekend.

Running: Climb Cadence Theatre’s “The Mountaintop” one last time next weekend. Still running are Richmond Triangle Theatre’s “Lazarus Syndrome” and Virginia Repertory Theatres “I Do! I Do!”