Local Mural to Accompany Richmond Group to South by Southwest 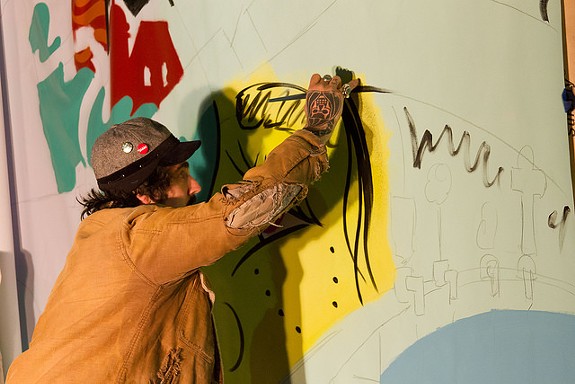 On a cold Thursday evening, local artist Mickael Broth is spray-painting a mural in high winds just above the Canal Walk.

"This is harder than a wall I did in Scott's Addition during snowmaggedon last year," he says, while his wife, Brionna, huddles from the cold, below. The two had a baby a couple of weeks ago.

Broth is working on a 20-by-10-foot canvas mural that will accompany the Greater Richmond Partnership when it travels to South by Southwest Interactive next month in Austin, Texas, March 11-15.

"I'm trying to add some stuff from different localities," Broth says, noting that a jumping figure at the top of the mural is Lamb of God's Randy Blythe.

A well-known Richmond street artist, Broth has playful work across town, including Richmond's Welcoming Walls and the Mellow Mushroom in Carytown. He also has a more serious show of abstract collages inspired by World War I, "La Voie Sacree," running through March 25 at Black Iris Gallery.

Attending industry-specific trade shows is part of the Greater Richmond Partnership's marketing strategy as it tries to spread the word about the creative community in Richmond. VCU Brandcenter students competed to pitch the winning concept of the interactive trade show booth, which will host the mural [Style publisher Lori Collier Waran served as one of the judges]. The team of Stanley Hines, Mario Bibian and Xia Du won for their concept called the Urban Oasis.

"We constantly hear how cool Boulder and Austin and Portland are," says Michael Ivey, communications director for the partnership, noting that many creative types and entrepreneurs work from home these days and choose cities based on lifestyles.

"We don't have a show like 'Portlandia' or a big quirky festival to show off how we are in Richmond," he says. "But a lot of people say Richmond is the closest family-friendly city to the Northeast, that it's more affordable, has less traffic and has this great dining scene. We have all these advantages and accolades, we just have to make sure we get them across to the right people."

The partnership will be accompanied on its trip to Austin by economic development representatives from partner localities: Chesterfield and Henrico counties and Richmond are each sending a staff person; additionally representatives from Capital One, Altria, the VCU Brandcenter, the VCU School of Engineering, the Virginia Biotechnology Research Park, the University of Richmond and Richmond Region Tourism all will be along and in the booth. Funding comes from a number of sources including Capital One, Altria, Whitlock and other in-kind support such as donations of time from three Brandcenter students and faculty, valued at $40,000.

The winning student team was registered for SXSW Interactive and will help staff the booth. Each student will receive a $300 stipend to help cover the costs of travel and lodging from the partnership. Organizers say in a press release that "the faux urban streetscape will offer a welcomed alternative to the tech-heavy designs of many of the other displays we expect to slather the trade show floor."

They'll also be handing out T-shirts and cups with an RVA logo by Broth at the event during SXSW.