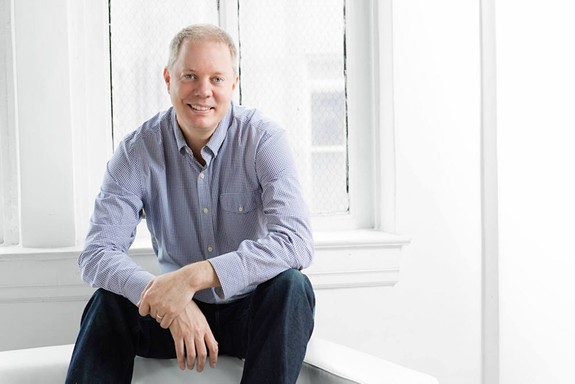 You may already know the Clover Hill High School grad works as a head writer on NBC's “Saturday Night Live" and has been a writer with the venerable sketch comedy institution for 10 years now.

This past weekend he helped guide one of its more memorable shows in years with host Larry David and his twin, politician Bernie Sanders guesting. Tucker tells me he helped Weekend Update host Colin Jost "a little" with the writing of the overshadowed "Ebony and Ivory" piano sketch that was a dig at racially biased media coverage of the Super Bowl.

Indeed, political years seem like the best ones at SNL.

A few months ago, Tucker also launched a new sports comedy website, The Kicker, under the digital arm of SNL, known as Above Average.

Style caught up with him not long after to learn more.

Style Weekly: I think a lot of people were shocked there wasn’t anything exactly like this comedy sports website already available.

Bryan Tucker: Yeah, I agree. That's one thing that’s gratifying to me – everyone who sees it has said that to me. I think there have been some attempts. The Onion had a show called "SportsDome" on Comedy Central. There was a Norm McDonald show on Comedy Central. And they’re been a few websites with not nearly as much infrastructure involved. So I tried to learn the lessons from those things and do things differently . . . We’re small now, we only have nine employees. So we’re still trying to build it, see what it is, find the audience and just get it going.

But this is an idea I know you’ve had for years. I remember you talking about it back in 2008 when I profiled you on the set of SNL.

Yeah, definitely. I’ve been thinking about it for like 10 years. I pitched a tv show to a couple cable networks a long time ago. But then slowly, I realized in order for it to find the right audience we just decided it would be better to build from the ground up, build it slowly, and have the audience come to it. Rather than, 'let's see if the audience at a place like Comedy Central likes sports,' or 'let's see if a place that likes sports can handle comedy.' There’s never a perfect fit.

Also a big thing that’s changed in the last 10 years is the way people consume media. With people watching so much on computers and phones, it seemed like a good idea to build it that way.

So there’s the potential if something catches online, it could spin off into a show.

Absolutely. We did a presentation for industry types and brands that might want to work on it with us, and what I told them was I wanted it to be a brand. Like when you’re looking for movie reviews you think of Rotten Tomatoes. This would be more like: If something happens in sports, you go to the Kicker to get our comedic take on it. You know we’ll have something witty to say about it. My guess is that will take a long time but we’re off to a pretty good start.

And you’re partnering with a guy from the Onion right?

Yeah, the general manager for the site, Grant Jones, used to work on the business side of the Onion. He worked with brands to be a part of the Onion style. He had done Onion Sports. Mostly he is the guy who helps make the site money and helps run it. And there’s a guy named Marc Lieberman who is the business manager of Above Average [the digital arm of SNL]– he worked on Onion "SportsDome." And he kind of shared the vision of it that I had when I brought it to Above Average about two years ago.

So that’s how you’re able to do both because they’re under the SNL umbrella?

Yeah, that’s right – and I worked real hard this past summer getting it up and running, hiring the right people. The people who are putting the stuff up every day are full-time employees of the Kicker and I’m just kind of the guy who supervises and sets the tone. They do most of the work and I get most of the credit. So it’s very nice for me [laughs].

Man, you’ve been there at SNL 10 years now. That's a helluva run. Having worked with all these great athletes as hosts, did that teach you much about this endeavor of sports humor?

Yeah, absolutely. It taught me something and gave me credibility with advertisers and brands that would want to work with us. I think mainly what it taught me -- and this is true of almost any host – is to kind of find what they’re good at and play to that rather than try to think of an idea and try to fit them into it. Especially with non-actors or non-comedic people. You have to have them play within themselves and find what’s naturally funny about them and write around that. Rather than start with the idea. That’s what I'm trying to bring to the Kicker.

As a writer, did you work on many of the sports sketches at SNL?

It's funny, the New York magazine Vulture asked me to come up with my favorite sports sketches I was involved with. There were only a few on SNL that were pure sports sketches. One was Tim Tebow meets Jesus. I did the show “Whats Up With That” when Mike Tyson was there. The Rock as Bambi. But also I did the Racial Draft on Chapelle Show. [Tucker was one of two staff writers on the show]

I wondered if your boy Jason Sudekis would be involved with the Kicker. When you introduced me to him, he instantly started in on college basketball.

Yeah, he's a big Kansas guy. We definitely talked about doing stuff. I was hoping to get him involved. Actually I sat down with him on a script and we talked about it last summer, then he went down to Atlanta to do a movie. I know he’s supportive of it, and I’d love to see him do something for us.

I imagine as a hardcore University of North Carolina Tarheel fan, your biases will shine through.

I think that’s possible. If you’re going to have a strong voice, it’s important to show what you like . . . Those Internet troll comments are gratifying because it shows a real passionate audience out there that loves sports. That’s one thing this site has -- that not many other comedy sites do – a built in audience of people who already care so much.

And I’m not at all afraid of doing something small or local. I talked to a columnist from St. Louis about writing something for us that was very St. Louis centric. If we can get that grassroots support, it would be great.

One thing we’re doing: We ask a bunch of celebs to name their favorite team. Then tell us the best thing that could happen to them. Like Jim Brewer talking about the Mets during the world series. Andy Samberg on the 49ers. Wyclef Jean talking about Brazilian soccer teams. JB Smoove talking about US Women's team. Leslie Jones talking about Lakers and Larry Bird in '80s. That seems like something that could open the door to user-generated content.

[Laughs] Oh yeah! Right, right. That’s great. I remembered that sketch and I watched it again. You can probably see it on Yahoo. You’d be surprised at how slow it is – there are a couple of really good laughs in it. It’s just funny how we remember things.