Updated, Feb. 11: Dominion has responded to Style Weekly regarding the concerns expressed by local creatives and the move by individuals to pressure bands to boycott this year's Dominion Riverrock.

David B. Botkins, director of media relations and communications with Dominion Virginia Power and Dominion generation e-mailed the following statement:

"Virginia’s waterways are just as important to Dominion and its employees as they are to you. We want to make sure everyone understands our plan for ash pond closures. Here’s the bottom line: We have never nor will ever dump coal ash into our waterways. We are closing coal ash ponds to prevent accidents like those that have happened in other states. Water from pond closures will be filtered, treated, tested then released. We will not allow ash or toxic water to flow into the James – and the process is regulated to make sure that doesn’t happen. Water monitoring data will be available to the public on our website.

Coal ash is classified as non-hazardous waste by the U.S. Environmental Protection Agency, an important fact that often gets unreported. The ash pond closures taking place is a positive environmental development. We are following sound, established practices as well as the letter of state and federal law. We are being pro-active, safe and working with a sense of urgency. This effort is part of Dominion’s moving away from coal as an energy source while cleaning the environment, as mandated by the EPA.

Botkins also asked that we share a "video explainer" that you can view here.

In addition, he noted that regarding meeting with the bands, "we look forward to scheduling that and clearing up the inaccurate information that has been circulating on this issue."

Musician DJ Williams told Style that he had been invited by an employee of Dominion to a Neighborhood Association meeting that will be held on Feb.23.

The recent announcement for this year's Dominion Riverrock Fest, organized by Venture Richmond and Sports Backers and sponsored by Dominion Resources, seems to have come at an awkward time.

People are still steamed about the news of Dominion getting a permit to dump treated coal ash wastewater into the James River -- and they're letting the musicians slated to perform at the large weekend event know about it.

The musical artists for the event billed as the "nation's premier outdoor sports and music festival" include headliners G. Love and Special Sauce, Keller Williams and local acts such as DJ Williams Projekt, Mikrowaves, Big Mama Shakes and Jackass Flats. It drew an estimated 100,000 people last year over the weekend. 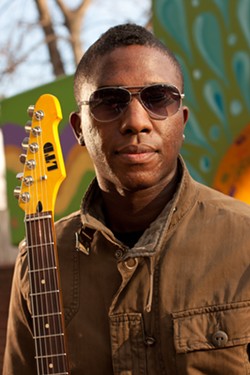 Musician DJ Williams has recently responded on his Facebook page and his post is being widely shared. In it, he asks that people not blame the bands for the behavior of Dominion and notes that some of the bands are working to donate proceeds or in some other way raise awareness about the River. You can read his response below.

The outdoor sports and music festival, scheduled for May 20-22, has faced anti-Dominion messages in previous years. But regarding this new effort aimed at bands, Williams tells Style by e-mail: "It's been mainly posting propaganda on our artist/personal pages and saying things like we will lose respect for you and will boycott all your shows as a result -- as if I worked directly on the board at Dominion Power."

The closed Facebook group RVA Music for the James is a coalition of artists and musicians dedicated to helping the river. In recent days, some of its 130 members have been encouraging people to speak out to musicians booked at the festival.

Chanelle Vigue, owner and co-host of Radio Rubber Room, a weekly music podcast, says this effort is about "more than one boycott" but rather spreading awareness. She isn't advocating threats of future boycotts to the artists but does hope that festival organizers will look for a different sponsor than its namesake Dominion next year.

She points to the "irony" of a festival by the river that’s "sponsored by same company planning to dump toxic waste into the river at less than prescribed standards."

"As far as RVA Music for the James, we are looking at bringing together Richmond's music community around an issue people feel strongly about," she says by phone. "This is about longterm preservation of the river. Individuals may have posted things on artist pages ... but the conversations on our site have been productive, discussing multiple perspectives. ... It's a big debate right now."

Vigue could not speak to whether there will be any planned protest on the weekend of the event. She does note that there has been ongoing discussion about more music-related events in the future to raise awareness and donations for the river.

So, there has been a lot of messages sent out to the bands performing at this years Riverrock Festival on Brown's Island this May. The majority of these messages containing people's discontent of the actions of Dominion Power and there involvement with said festival. I don't normally take any kind of stand on social media for a number of personal reasons but some of these messages have been very disrespectful to not only myself but also my fellow musical family and that is something I will not tolerate. I completely understand the grounds for the disapproval of Dominion and in no way agree with what they are doing to our river system and see that this festival has come at a very sensitive time. I was approached by someone who I highly respect in the RVA community to be a part of this event and have never conducted business with anyone in Dominion Power. I feel it would be very disrespectful to pull my band out of this event. We (the bands) have all been talking to see how we can bring some positivity to this whole matter by setting up a charity, donating proceeds, or creating awareness in some way about our lovely James River. I have given my time to a lot of fundraisers, charities, and other events to give back to the city and community that I very much love and respect so right now I'm asking for the same in return. Let's not blame the bands but let's find a way to voice our opinions respectably and make a change.

Style has reached out to others involved with the weekend and will update when possible.

Opponents of the permit who hope to see it repealed and the wastewater treated to drinking standards are holding a march ("Dump Dominion: A March For Our Rivers") on Monday, Feb. 15 at noon.