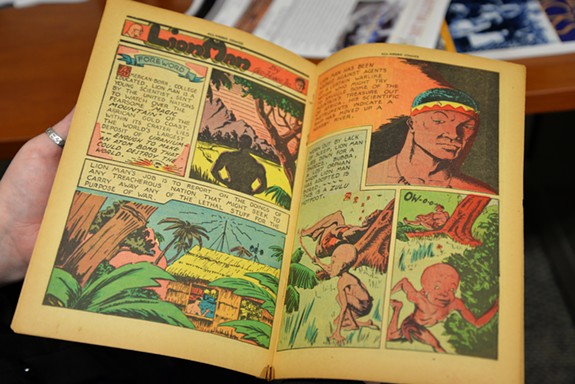 No doubt, VCU Libraries has some cool stuff in its comic book collection. But that collection just got a whole lot better with the acquisition of All-Negro Comics No. 1.

This is the extremely rare first comic book written and drawn solely by African-American writers and artists.

And just in time for Black History Month.

The copy of All-Negro Comics No. 1, reportedly in good condition, was donated to the Comic Arts Collection by VCU alumnus Dave Anderson, a dentist in Northern Virginia.

According to Hope Evans Boyd, daughter of the original publisher, Philadelphia newspaper reporter Orrin C. Evans, "there was no second edition simply because after the first, with its positive images of Blacks, no one would sell him newsprint."

“It’s one of the holy grails of comics,” said Cindy Jackson, library specialist for comic arts, who oversees VCU Libraries’ Comic Arts Collection, which has roughly 175,000 items, including more than 125,000 comic books. “It is so important to the history of comics. I’ve been in this job for 20 years and I never thought I’d ever hold one of these in my hands. And now we have one in the collection for researchers to use.”

All-Negro Comics was published by Philadelphia newspaper reporter Orrin C. Evans along with two partners. Evans, who died in 1971, was inducted into the Will Eisner Award Hall of Fame in 2014.

Tom De Haven, a creative writing professor in the Department of English in the College of Humanities and Sciences and the author of “It’s Superman!” and “Derby Dugan’s Depression Funnies,” among other novels and graphic novels, said that All-Negro Comics No. 1 is “one of the very rarest of the rare.”

“[It’s] an impressive and very important addition to the Cabell Collection,” he said. “The publisher, Orrin C. Evans, who’s been inducted into the Eisner Hall of Fame on the basis of that book, was a remarkable man with a fascinating career in journalism and publishing.”

Inside the comic, a letter to the reader from Evans under the headline “Presenting another FIRST in Negro History” demonstrates that Evans set out to produce a comic book that reflected his values and showcased African-Americans in heroic roles.

“Dear Readers: This is the first issue of All-Negro Comics, jam-packed with fast action, African adventure, good clean humor and fantasy,” the letter says. “Every brush stroke and pen line in the drawings on these pages are by Negro artists. And each drawing is an original: that is, none has been published ANYWHERE before. This publication is another milestone in the splendid history of Negro journalism. All-Negro Comics will not only give Negro artists an opportunity gainfully to use their talents, but it will glorify Negro historical achievements.”

All-Negro Comics ended up running for only a single issue, likely due in part because it cost 15 cents — higher than the typical 10-cent cover price of comics in the 1940s — and because it would have had a difficult time getting attention among the mainstream comic audience because of its subject matter. [see Evans' quote to Style above]

“It had a lot of factors going against it,” Jackson said. “But it was still amazing and groundbreaking, even though it didn’t go beyond the one issue.”

Few copies of the comic remain, and far fewer still are in good condition.