Is "The People vs. OJ Simpson" The Next Hot Murder Show? 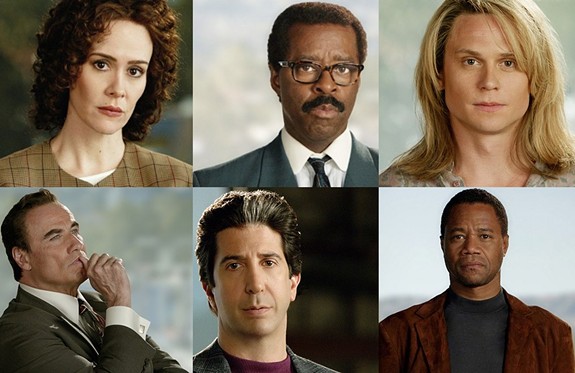 Just in time for another possible snow next week, there’s a hot new 10-episode television series involving a murder trial that could earn a rabid audience.

“The People vs. OJ Simpson: American Crime Story” debuted last night on FX, accompanied by a round of critics universally praising the tight writing by screenwriters Scott Alexander and Larry Karaszewski (“The People vs. Larry Flynt,” “Ed Wood”) and the acting of its all-star cast.

“In the trial that follows, our current social conflicts and media culture were born,” The New York Times writes in its glowing review before jokingly referring to the show as “Unmaking a Murderer.” The series is based on the book “Run of His Life: The People vs. OJ Simpson” by New Yorker contributor Jeffrey Toobin.

One of the most chilling scenes last night involved seeing Simpson (a schizoid Cuba Gooding Jr.) attend his former wife’s funeral with attorney Robert Shapiro, played with eyebrow-heavy zeal by John Travolta. Simpson walks down the aisle and stares at the open casket before kissing Nicole Brown’s forehead, to the horror of her family and even Shapiro, who has just watched Simpson fail a polygraph miserably.

So far, the show doesn't feel like a recreation but rather a window into the behind-the-scenes action that the voyeur audience at the time craved.

Other highlights include a cutthroat Marcia Clark ("American Horror Story's" Sarah Paulson), a seemingly always high-on-mushrooms Kato Kaelin (Billy Magnussen); a silky-smooth Johnnie Cochrane (Courtney B. Vance) picking suits by colors that don't scare Michael Jackson; and the use of Nina Simone’s cover of “I Shall Be Released” while the police come to arrest Simpson after he takes off in the white Bronco.

Television critic Emily Nussbaum (with whom I've argued about the show “Girls” by e-mail) had this to say about the new series in the New Yorker:

"[It] feels hot-wired with modern parallels, which extend far beyond those baby Kardashians. Without ever mentioning the links, the creators evoke the Cosby scandal and Black Lives Matter, the debate about Hillary’s 'likability' and Obama’s legacy, the rise of reality TV and the expansion of cable news. It’s a tasty Proustian cronut that makes you remember the events of not only 1995 but 2015.

I recall watching the OJ trial in California in 1995 -- which to most of us is a vivid pop-culture memory but to others, like some of the younger members of our newsroom, doesn't register. I'd recently graduated college and was living in San Diego when it started. In my memory it plays like a strange, boring soap opera airing in the middle of the day (and I've covered murder trials before as a news reporter -- I know how tedious they can be).

One image that stands out was not from the trial but rather the famous chase: Those crowds of people along overpasses cheering while the white Bronco raced along the freeway. Many people were disgusted by this public display of support for what looked like a murderer, a suicidal OJ holding a gun in the back of his friend’s ride. Later, of course, there were the vastly different reactions, depending on personal perspectives and experiences, to the not-guilty verdict -- a pivotal moment in race-relations in this country.

It was a time when many white people, including me, realized the depth of the problem that still existed between law enforcement and the black community. Regardless of evidence, some people expressed that Simpson was framed (especially after learning of Mark Fuhrman) and others who believed he was guilty were celebrating anyway because the trial proved that a wealthy black man could get the same verdict as a white man in court ... if he had enough money to pay for it.

Watching the fast-moving and entertaining show last night, another thing I remembered was a screenwriting class I took at the Visual Arts Center in Richmond around 2006. There was an older woman in the class who really wanted to work on a screenplay about the Simpson murders. But nearly everybody in the class thought it was a bad idea, including the teacher. It’s all been done to death, we told her, no pun intended. Television shows. Books. We all know what happens. There’s no drama to be had.

We were wrong. “People Vs. OJ” clearly makes that case.