Macklemore Stuck in RVA While His "White Privilege" Goes Viral 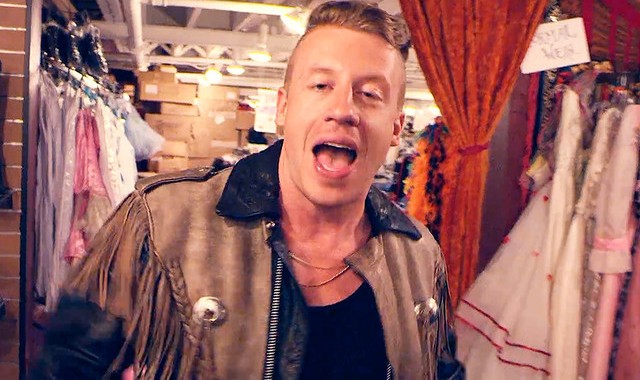 That's because the famous rapper is stuck in Richmond waiting to perform a concert that has been moved from tonight until Sunday at Altria Theatre. All tickets will be honored for the new date.

That should give him plenty of time to go online and read the mess of press concerning his new song, "White Privilege II," which dropped Thursday night. The nine-minute track (a sequel to a 2005 song of the same name) ponders the role of white hip hop artists/fans within the struggle of the Black Lives movement.

"We take all we want from black culture, but will we show up for Black Lives?" he asks in the song, which you can check out below.

Responses to the song have varied widely online.Over at the Atlantic -- an outlet which has covered racial issues in a meaningful way over the past year -- writer Spencer Kornhaber says the main appeal of the song is pathos, not politics. And that Macklemore is a little light in the artistic dept.

"The fact that his lyrics are so basic, forgoing metaphor or ambiguity or impressionism, certainly accounts for a big part of his wide appeal," he writes. "But it also accounts for why many other listeners (ahem) feel pandered to, exhausted by, and/or vaguely embarrassed by his songs."

The LA Times was similarly embarrassed, writing that the long-winded song is "so self-flagellating that it hurts."

What do you think? Is Macklemore simply cashing in on a movement, legitimately attempting to spur discussion among his fans, or as some think, playing the "white savior"? Could it be all three? "What's the intention" as he asks in the song? Is this even a decent song or just a rambling apology disguised as a song?

If you see him out there on the snowy streets, you can ask him yourself.

Oh, and if you don't want to listen to his music, you can read the lyrics to the controversial number right here:

Pulled into the parking lot, parked it

Zipped up my parka, joined the procession of marchers

In my head like, "Is this awkward, should I even be here marching?"

Thinking if they can't, how can I breathe?

Thinking that they chant, what do I sing?

I want to take a stance cause we are not free

And then I thought about it, we are not we

Is it my place to give my two cents

Or should I stand on the side and shut my mouth for justice? No peace

Okay, I'm saying that they're chanting out, "Black lives matter", but I don't say it back

Is it okay for me to say? I don't know, so I watch and stand

Only separated by a badge, a baton, a can of Mace, a mask

A shield, a gun with gloves and hands that gives an alibi

Takes another child's life on sight

Blood in the streets, no justice, no peace

There's blood in the streets, no justice, no peace

Blood in the streets, no justice, no peace

There's blood in the streets, no justice, no peace

(Ben, think about it)

You've exploited and stolen the music, the moment

The magic, the passion, the fashion, you toy with

The culture was never yours to make better

You're Miley, you're Elvis, you're Iggy Azalea

Fake and so plastic, you've heisted the magic

You've taken the drums and the accent you rapped in

You're branded hip-hop, it's so fascist and backwards

That Grandmaster Flash'd go slap it, you bastard

All the money that you made

All the watered down pop bullshit version of the culture, pal

Go buy a big-ass lawn, go with your big-ass house

Get a big-ass fence, keep people out

It's all stubborn, anyway, can't you see that now?

There's no way for you to even that out

You can join the march, protest, scream and shout

But they see through it all, people believe you now

You speak about equality, but do you really mean it?

Are you marching for freedom, or when it's convenient?

Want people to like you, want to be accepted

That's probably why you are out here protesting

Don't think for a second you don't have incentive

Is this about you, well, then what's your intention?

Psst, I totally get it, you're by yourself

But seriously, my little girl loves you

I'm not kidding, my oldest, you even got him to go thrifting

Their aunt is gay, when that song came out

My son told his whole class he was actually proud

That's so cool, look what you're accomplishing

Even an old mom like me likes it cause it's positive

Cause you get it, all that negative stuff isn't cool

Even the protest outside – so sad and so dumb

If a cop pulls you over, it's your fault if you run

[Interlude: Multiple voices] So, they feel that the police are discriminating against the, the black people? I have an advantage? Why? Cause I'm white? What? Haha. No. People nowadays are just pussies. Like, this is the generation to be offended by everything. Black Lives Matter thing is a reason to take arms up over perceived slights. I'm not prejudiced, I just–. 99% of the time across this country, the police are doing their job properly

Some of us scared, some of us defensive

And most of us aren't even paying attention

It seems like we're more concerned with being called racist

Than we actually are with racism

What if I actually read a article, actually had a dialogue

Actually looked at myself, actually got involved?

If I'm aware of my privilege and do nothing at all, I don't know

Hip-hop has always been political, yes

It's the reason why this music connects

Then I'm trying to be politically correct?

I can book a whole tour, sell out the tickets

Rap entrepreneur, built his own business

If I'm only in this for my own self-interest, not the culture that gave me a voice to begin with

Then this isn't authentic, it is just a gimmick

The DIY underdog, so independent

But the one thing the American dream fails to mention

Is I was many steps ahead to begin with

My skin matches the hero, likeness, the image

America feels safe with my music in their systems

And it's suited me perfect, the role, I've fulfilled it

And if I'm the hero, you know who gets cast as the villain

White supremacy is the soil, the foundation, the cement and the flag that flies outside of my home

White supremacy is our country's lineage, designed for us to be indifferent

We take all we want from black culture, but will we show up for black lives?

We take all we want from black culture, but will we show up for black lives?

[Interlude: Multiple voices] Black Lives Matter, to use an analogy, is like if there was a subdivision and a house was on fire. The fire department wouldn't show up and start putting water on all the houses because all houses matter. They would show up and they would turn their water on the house that is burning because that's the house that needs it the most. My generation's taken on the torch of a very age-old fight for black liberation, but also liberation for everyone, and injustice anywhere is still injustice everywhere. The best thing white people can do is talk to each other. And having those very difficult, very painful conversations with your parents, with your family members. I think one of the critical questions for white people in this society is what are you willing to risk, what are you willing to sacrifice to create a more just society?