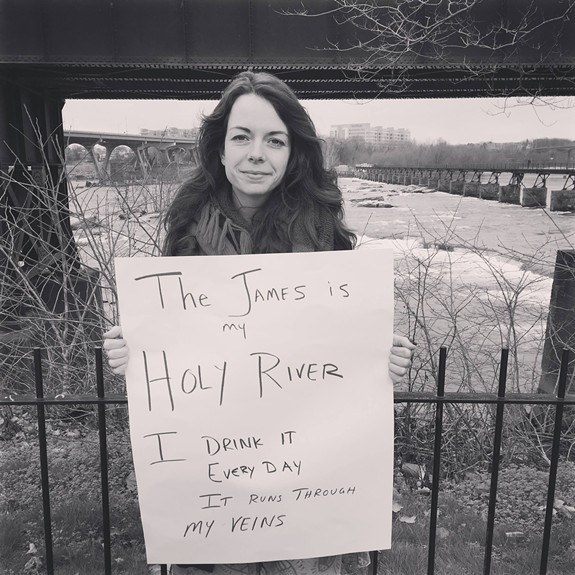 As a singer with the meditative local duo Lobo Marino, Laney Sullivan is no stranger to socially conscious music.

The group wrote the song "Holy River," which was the first track on its album "City of Light." It was inspired by the Ganges in India and the James here in the band members' hometown, where they filmed the video.

Now Sullivan and others are continuing to speak out and encourage local social media-making after the State Water Control Board approved permits allowing Dominion Virginia Power to dump treated wastewater from coal ash pits into the James and Potomac rivers.

"I think the [Department of Environmental Quality] really failed in this matter with the permit limits. I think our system of government failed us and the only option we have besides taking back that permit is to encourage Dominion to be a more enlightened corporation," Sullivan says. "I have to put some of my energy into faith that Dominion could make that choice to self-regulate at a higher standard than government is asking them."

Sullivan and others, such as local entertainer Parker Galore, were speaking out before news of the meeting broke, starting the hashtag #GatherForTheJames weeks earlier. They held a peaceful gathering of artists, media-makers and poets by the river Jan. 9 to educate the public on the issue. There is some audio here about what the river means to participants.

Laney says she became aware of the issue Dec. 8 after reading postings about the then-pending water board meeting on Facebook.

"My personal belief is that it's important that more people feel empowered to organize themselves in their communities and protest in ways that are unique to their talents and desires," Sullivan says from the band's tour stop in Charleston, South Carolina. "I think there will be many more actions."

"The general public seemed to be mostly kept in the dark until it was too late," says Galore about the permit meeting. "It was disheartening and shocking that this was even pushed through as quickly as it was, even after at least 200 people -- including eco-scientists, river preservation groups, attorneys with the Southern Environmental Law Center and concerned citizens -- provided hard evidence of why this was a terrible idea. The DEQ seemed glazed over."

Sullivan suggests that people contact Gov. McAuliffe's office to voice their concerns. She also directed advocates to the James River Association's action network at www.riveratrisk.org. There's a petition being circulated at Change.org.

Sullivan is also involved with protesting the Atlantic Coast Pipeline -- a group met today at the General Assembly building for a Lobby Day rally -- and says that her band recently finished a music video collaboration with Good Day RVA for a new song, "Awake," shot at Yogaville Ashram in Buckingham.

"We're hoping to premiere that video on NPR or PBS, we're shooting for the stars," she says. "The song is written specifically about this time in human history of dealing with energy and our relationship with it. ... Fracking is not the answer either."
Prev
Next