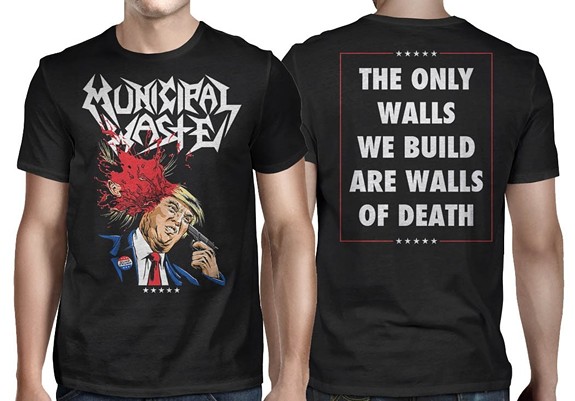 One of the River City's best frontmen -- and all-around good guy, Tony Foresta -- recently spoke with Noisey about a graphic new T-shirt the band released featuring a drawing of GOP front-runner Donald Trump blowing his brains out.

It seems the popularity of the shirt, which you can buy here as soon as it's back in stock, has taken the group by surprise. It's also receiving extensive media coverage online.

In the detailed drawing, Trump's legendary hair is shooting everywhere as well as one ear. The back of the shirt makes reference to Trump's famous wall plan to keep illegal immigrants out of the country: It reads "The only walls we build are walls of death."

During the interview, when asked to say something positive about Trump, Foresta notes: "The Richmond hardcore scene was the shit when George Bush was president. I blame Obama for Wasted Time breaking up. The only thing I really enjoyed by Trump was when Stone Cold stunned him on WWE. I also got drunk in one of his casinos by accident once."

Another nationally known local singer, Randy Blythe of Lamb of God, has already vowed to leave the country if Trump wins the presidency. Rolling Stone magazine also reported today that Blythe is working on a "futuristic novel" during his group's winter trek with the band Anthrax.

Some more from the interview in Noisey:

Noisey: How have people been reacting to it? Is it a big seller?

Tony Foresta: It's kind of crazy. We're making so much money off of it that we might actually turn into Republicans! Okay, not really ,but it's selling pretty good. A lot of people don't like that guy. I've been reading some of the comments from people that are "shocked" that we would say something bad about Trump. We talked about killing George Bush on our first freaking album! People need to read the lyrics of the bands they listen to before they get butthurt about the things they have to say. Who knows, you could be listening to some Nazi shit and not know it. If you're going to get worked up over a band you "listen to," at least pay attention to the things they have to say in their songs. I mean, I know 80 percent of our Waste songs are about drinking and all, but I swear, there's some content in there, dammit!

Noisey: I saw a music blog post the story with a (fake) headline, "Donald Trump is going to sue Municipal Waste over their new shirt." That's obviously just a clickbait thing, but have you thought about how you'd handle it if you ever were contacted by someone from his camp about the shirt?

Tony Foresta: My mom called me yesterday and yelled at me about the shirt. That's never happened to me before. We've been writing offensive songs and putting out fucked-up imagery of politcal figures and religious dicks for over 10 years now, so it's kind of weird that this is the first thing that has actually caused a big stir. I mean, if you look at the past Waste art and our other bands' imagery, this shirt is kind of a no-brainer. It's weird that now, after all these years, this is what gets people worked up. But yeah, if Trump gets pissed ,bring it on. I doubt he can yell as loud as my mom.

The site Metal Injection has already run a piece looking at alleged right-wing Waste fans' angry response to the shirt. Though, to be honest, some of these comments read like those "reputation management" services now used by wealthy personalities to cruise the internet and offer a corrective to reality.