If you're heading out to see the midnight premiere of "Star Wars: The Force Awakens" this week, you may want to leave your lightsaber at home.

As reported by RVANews.com, a couple of movie theater chains with locations in Richmond have issued guidelines for fans who may want to dress up for this week's premiere.

Bowtie Cinemas, which owns the Movieland theater on the the Boulevard, sent out this notice on Twitter encouraging fans to dress up, but asked them to leave the face paint, capes and toy weapons at home. 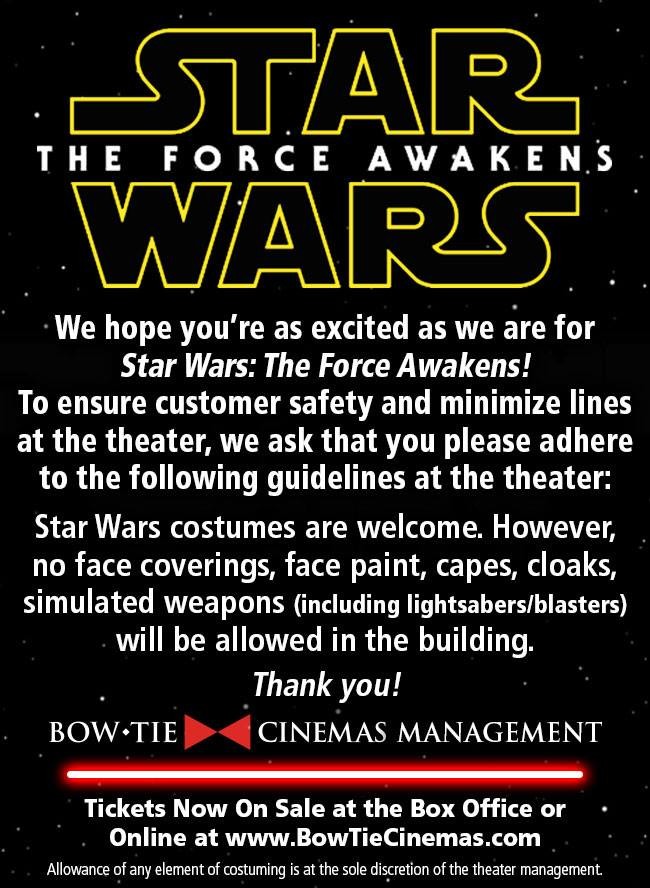 Regal Cinemas, which operates several theaters in the Richmond area, has issued similar restrictions on costumes.

While some fans are expressing frustrations over the limits, others are sharing horror stories from the Star Wars prequels in the early 2000s. User fusion260 over on the r/RVA subreddit shares this tale of woe:

After working at Regal Cinemas in Fort Lauderdale during the The Phantom Menace, I can tell you it was a nightmare. Fans would come in with costumes and lightsabers and blasters and they would have kids play-fighting in the lobby bumping into customers and causing a disturbance in the theaters from the sound and light effects going off in a dark theater, and there was little we could do about it, per contracts, unless it affected the safety and security of the audience or theater.

There's much more to Fusion260's story on the Reddit thread, including armed guards escorting the film and a mob of angry fans demanding refunds.