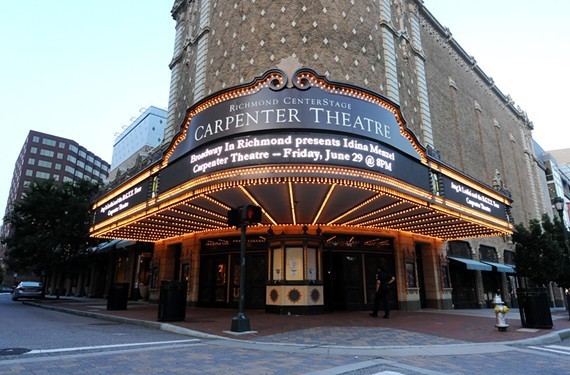 With a $5.5 million grant from the Dominion Foundation, Richmond CenterStage soon will have a new name once it gets the stamp of approval from City Council: Dominion Arts Center.

A press release says "Richmond CenterStage and its venues are part of a successful public-private partnership between Richmond CenterStage, the Mayor’s Office and City Council." But followers of the project might frame things differently, noting the financial issues that have hounded CenterStage from its start, including taxpayer bailouts.

But that's spin for you. Here is the full announcement from CenterStage, issued this morning:

Richmond CenterStage and Dominion Resources today announced that the performing arts complex on East Grace Street in downtown Richmond will be renamed the “Dominion Arts Center,” in recognition of a $5.5-million grant from the Richmond-based energy company’s Dominion Foundation. The grant will be used to support the ongoing operation, maintenance and physical improvement to the facility.

“Dominion is invested in the cultural and artistic vibrancy of our local communities,” said Thomas F. Farrell II, chairman, president and chief executive officer of Dominion Resources. “Our grant seeks to strengthen the performing arts by helping sustain the unique and historic Carpenter Theatre and the other venues at the downtown complex. Richmond’s dynamic arts scene is an indispensable ingredient in making our region an attractive place to live and work.”

The new name is expected to be phased in on tickets and marketing materials beginning early next year with building signage expected to be installed next spring. The Dominion Arts Center includes the fully-renovated, 87-year-old, nearly 1,800-seat Carpenter Theatre; the multi-use space Rhythm Hall; the intimate Libby S. Gottwald Playhouse; and the Genworth BrightLights Education Center promoting arts in education to the region’s Pre-K-12 students, teachers and families. The facility also is home to the administrative offices of Richmond CenterStage, the Richmond Symphony and the Virginia Opera.

“Dominion has long been a generous corporate citizen that has supported many organizations and programs in Richmond, including the local arts community,” said Janet Starke, executive director of Richmond CenterStage. “Having an historic venue like the Carpenter Theatre is truly unique for any performing arts organization. People are amazed and inspired from the moment they walk in – even before the curtain rises. However, having this wonderful, historic facility also means that funds are needed to keep it in the best possible condition for every performer who takes our stage or patron who sits in our seats. Dominion Foundation’s grant will make it possible for us to ensure that our facility remains a treasured destination for performers and audiences alike.”

Dominion is a significant supporter of the arts community in Richmond, including Richmond CenterStage. In 2012, the stage at Altria Theater was renamed Dominion Stage in appreciation of the company’s $2 million gift that helped renovate that historic theater. Since 2007, Dominion has given more than $4 million to Richmond CenterStage for construction, operations, and artistic and educational programming.

“The soon-to-be Dominion Arts Center is the Richmond Symphony’s home – our performance home and our administrative home – so we know first-hand the importance of having a facility that is well-maintained and in top condition for patrons and performers alike. Many local arts groups use the venues in this performing arts complex, and we’re very grateful for Dominion’s commitment to help keep this place attractive and fully up-to-date,” said David Fisk, executive director of the Richmond Symphony and vice chair of the Resident Company Association. Richmond CenterStage’s resident companies include the City of Richmond Department of Parks and Recreation, Elegba Folklore Society, Modlin Center for the Arts at the University of Richmond, Richmond Ballet, The Richmond Forum, Richmond Symphony, School of the Performing Arts in the Richmond Community (SPARC), Virginia Opera, Quill Theatre and Virginia Repertory Theatre.