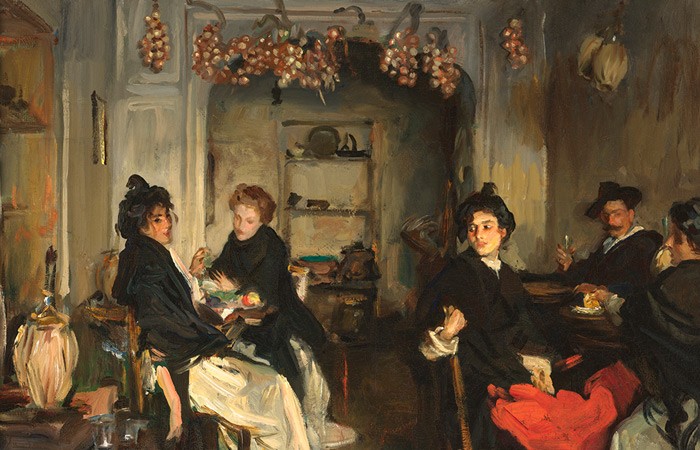 Standing in front of Mary Cassatt’s softly impressionistic “Lydia Seated on a Porch, Crocheting,” with the sublimely complementary palette of “Moonlight, New England” by Childe Hassam hangs off to the right, a visitor can’t help but feel a frisson of excitement.

Because of collectors James and Frances McGlothin, the Virginia Museum of Fine Arts' American art galleries are 73 works richer and infinitely more fascinating. Originally intended to be donated to the museum after their deaths, the couple instead decided to share in the public’s enjoyment of the works by donating them now. It is nothing short of a transformational gift.

The scope of the collection, which the McGlothins started acquiring in 1996, significantly adds to VMFA’s American holdings. Chief curator Michael Taylor calls the collection a game changer.

“When combined with our extant holdings, the collection transforms VMFA into an important destination for the study and appreciation of American art. Future acquisitions will build upon this legacy to include new works by artists already in the collection, as well as artists not yet represented so that we can enrich and enliven our American narrative.”

That narrative is stirringly exemplified in the arresting “Yachting the Mediterranean,” a large 1896 piece by Julius Leblanc Stewart showing Americans – wasp-waisted Victorian women and dandified men -- aboard a yacht churning through water that seems about to spill out on the viewer.

In a rare circumstance, the McGlothlins’ collection was developed over the years in thoughtful concert with VMFA’s American art collection, resulting in a significantly larger representation of artists working in the century between 1830 and 1930.

Associate Curator of American Painting and Decorative Art Susan Rawles sees it as adding both breadth and depth in early American landscape painting and particularly in late-19th- and early-20th-century “Gilded Age” holdings.

The museum now has a body of significant works by marquee names such as John Singer Sargent, Childe Hassam and William Merritt Chase that reflect the full spectrum of their stylistic development. The same holds true for Modernism. The collection includes artists once absent in VMFA’s permanent displays such as Everett Shinn and William Glackens, while bringing noticeable depth to their holdings by The Eight and the Ashcan School, with works by Maurice Prendergast, Robert Henri, George Luks and George Bellows.

“This is an extraordinary combination, as the paintings merge seamlessly with our previous holdings,” Rawles says. “Together, the two collections provide a more holistic American art continuum. It’s really the coming-together of the two parts that makes the whole so powerful.”

VMFA’s American art department occupies a rare position among its peers across the country. The combination of the McGlothlin Collection and the J. Harwood and Louise B. Cochrane Fund for American Art has set the museum on a trajectory virtually unique among art institutions.

“With our current collection and acquisition funds, we have the potential to become a leading force in the field and our audiences can expect to see new and important works of American art on regular display at the museum,” Rawles says. “We are very excited about our future.”