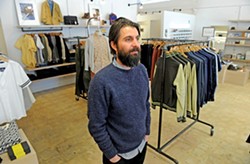 Need Supply Co. in Carytown started over 20 years ago in Richmond and has since become a popular destination for the slavishly stylish and fashionistas -- as well as a successful online commerce force.

Now owners are opening their second-ever store this weekend in Shibuya, Japan, with one more to follow on Nov. 28 in Kumamoto, Japan.

You can read about it here in (where else?) Fashionista.com. Style has a request out for comment from Creative Director Gabriel Ricioppo, but here is some more news from the linked article:

"Need Supply Co. recently closed a round of funding. Ricioppo was tight on details about that, but it does mean that Japan isn't the only news. They've also opened a studio in Los Angeles, where Ricioppo is now based, along with Need Supply Co.'s Fashion Director (and Ricoppo's wife) Krystle Kemp. There, they're working on Need, the retailer's first in-house line, which Ricioppo expects to launch for spring 2016. It will encompass both men's and women's clothing, as well as denim; price-wise, Ricioppo says it will "sit alongside our current brands," and reflect the fact that it's produced entirely in LA, which is also, unsurprisingly, where Need Supply Co. plans to open its next store. "We're not rushing it," said Ricioppo, adding that New York would likely follow LA, as the retailer has "a really strong following" there as well."

The site is currently having a 25 percent off sale on everything.