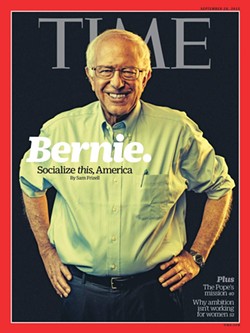 From an editorial standpoint, retouching a photo can be a sticky wicket. But in this case of the new Time magazine cover featuring presidential candidate Bernie Sanders, a local photo illustrator was called on at the last hour for some minor changes.

"It was just a little bit of the background – it was not the same tone,” says Jeffrey Glotzl. "I love bragging about it, but it was almost nothing of a job. Still it had to be done quickly."

Glotzl starting doing this kind of work in 2005 and mostly works with commercial photos and ad agencies. He's known for his retouching and clean-up work and his heavy duty image composites -- where numerous photos are stacked for photo illustration purposes. Most of the stuff he does is not editorial, but advertising work.

A couple years ago, he went to DC to participate in an APA event and had the name of photographer Stephen Voss passed to him. That was the connection that would lead to last week's striking Time cover of Sanders.

"I was sleeping when I got an email, which I saw at 6 am the next morning -- that the job needed to be done by 10 a.m.," recalls Glotzl. "I had to get the kids off to school, had like two hours to do that little bit of work, so it wasn't too big of a time crunch. I sat down, busted it out."

You can see slideshows of Glotzl's image composite work and how it's done on his website. And more photos by Voss here.