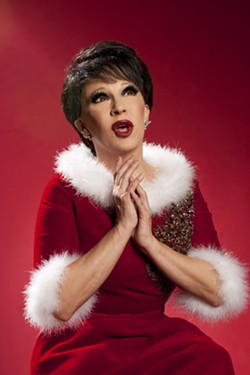 From the press release desk: Richmond CenterStage announced the return of its acclaimed U.S. TRUST "Life is a Cabaret Series: A Celebration of the American Songbook" for its fifth season.

The series begins on Friday, Oct. 16 with soul musician Brian Owens and The Deacons of Soul in Richmond CenterStage’s Libby S. Gottwald Playhouse. This season’s schedule includes performances on Friday and Saturday evenings.

Season subscriptions are available by calling 804.592.3400, and single tickets are available at 1.800.514.ETIX (3849), online at richmondcenterstage.com or at any Richmond CenterStage Box Office.

And here's the full line-up straight from the horse's mouth (descriptions quoted from press release):

BRIAN OWENS and The Deacons of Soul

Have Yourself A Merry Little Christmas: An Evening with Connie Champagne as Judy Garland

"What's Christmas without Judy Garland? Banish the Bah-Humbug and get yourself into the holiday spirit with an evening of holiday cheer the Garland way with Connie Champagne! Champagne is an award-winning actress whose performances as Judy Garland have wowed audiences from coast-to-coast. Renowned for her uncanny ability to conjure up the sound and spirit of Garland, Champagne sings carols and classics made famous by the stage and screen icon, along with some of the unexpected and often wacky gems Champagne's famed for creating. New York Times critic Neil Genzlinger described Champagne’s performance as Judy “a subtle masterpiece of parody and homage.” Don't miss this holiday favorite!"

Lies My Martini Told Me

"Join local cabaret artist and domestic goddess, Georgia Rogers Farmer as she celebrates love! The evening of songs and stories with Georgia is funny, poignant and pleasantly unexpected. Her cabarets include an eclectic mix of songs – ranging from standards, to Broadway, to popular music. This will be a fun-filled evening that you won't forget!"

"Ann Hampton Callaway presents a soaring celebration of the legendary ladies who helped shape the soundtrack of our lives – Barbra Streisand, Judy Garland, Ella Fitzgerald, Sarah Vaughan, Billie Holiday, Peggy Lee, Anita O’Day, Edith Piaf, Etta James, Carole King and Joni Mitchell. In this rare intimate setting, Callaway's one woman show takes a personal look at the iconic women who were trailblazers in music and whose careers, voices and songs helped to shape Callaway’s artistry. Selections include Over the Rainbow, People, How High the Moon, Tenderly, La Vie En Rose, The Folks Who Live On the Hill, and A Case of You."