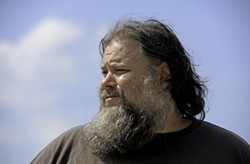 It’s been a week since the news was first reported, and reporter J.T. Street has since been showered with support. His crime? Airing racy interview video featuring Gwar's singer Blothar (Michael Bishop) that allowed a little too much of a view of the character's monstrous, udder-like codpiece for Fox affiliate KABB-TV's taste.

The band responded initially online: "Fox News anchor gets fired for showing Blothar's 'Bag of Dicks' on morning news. Do you think Fox News needs to lighten up and let the dick flag fly? #‎freethefrenum."

It has been reported online that the band had contacted the reporter, who had worked in his job for eight years, to offer condolences and free passes for future concerts. But after Style reached Bishop, he says this version of events is untrue. He also said that people getting fired because of Gwar is old hat by now.

"We did not reach out to him. If I spent the time chasing after every human who loses their job because of GWAR, I might lose my job as the singer," he explained. "People are bumbling idiots. The best one was the A&R vice-president of Hollywood Records (an imprint somehow related to Disney) who was courting the band to sign with that label. The fool brought his bosses, all high level executives at Hollywood Records to come see us play. He was fired on the spot. It happens all the time."

Instead, Bishop says the reporter from San Antonio wanted Gwar to give him a job.

"Sure thing, suit up and sign away your life. We can always use more slaves, but the pay sucks," he continues. "It is still probably better than being a member of the media at a place where they fire you because someone didn't blur out the fake wieners on the rubber monster. I would put a bullet in my brain before I would do that job."