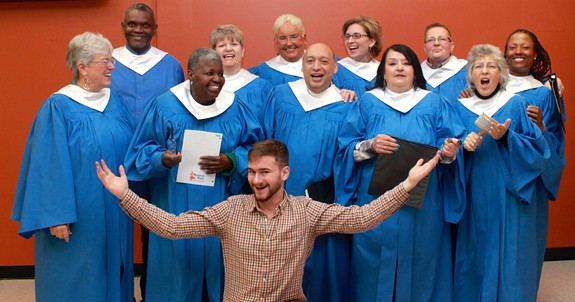 I had to check this out when an RVA magazine writer called the below video possibly "the worst thing" he's seen come out of Richmond. After watching, I must disagree. I've seen far worse and that was just in an old Dirt Woman calendar. I kid, Donnie, I love your old centerfolds with the corn dogs and the fluids.

For as long as you can, watch this NSFW video by M.C. Chikin Mane (a.k.a. Macon Mann) called "Richmond River Rat" that is being shared on social media today. At first I thought it was a brilliant, "Spinal Tap"-level parody and turns out it's kind of that, but it also comes from a place of real love -- and from a real musician.

Reached online, Mann says he is a fourth-year jazz piano major at Virginia Commonwealth University who makes his living playing piano at the MCC of Richmond ("proud to serve RVA's gay LGBTQIIA church," he says) and playing in local funk bands such as Commonwealth and Homemade Bread. The other rapper featured in the video is Charlie Ross, AKA Magic Mane.

Now for the money quote:

"My style is that dirty, greasy, salty chicken flow with a blessing from the Lord," Mann says via message. "The beats are Trap influenced with that dirty chicken flavor."

As fate would have it, Mann played piano at the Executive Mansion for Gov. Terry McAuliffe's Christmas party, he says. No word on whether the governor is a secret MC Chikin fan.

More from Chikin: "I take the music very seriously. I produced the beat, playing keys, synth, and composing the drumbeats using midi samples, and took great care into making the piece. But yeah the lyrics are silly as fuck. It's both serious and a joke. I love trap music ever so dearly (Your Gucci Mane, Migos, and ESPECIALLY Young Thug) and not just as a joke. It's really my favorite type of music. I draw my influences from a wide variety of musical genres, especially jazz (Miles Davis, John Coltrane, Herbie Hancock, Duke Ellington, Count Basie, Thelonious Monk, Charles Mingus, Bud Powell, Bill Evans, Wynton Kelly, etc."

He says he also regularly plays jazz gigs at retirement homes, bars and hotels -- "some of which I wish I could boast but I'm afraid they wouldn't want M.C. Chicken stamped on them."

It appears it doesn't matter whether the governor's mansion has MC Chikin stamped on it; or whether MC Chikin is spelled Chicken or Chiken, or Chikin -- I've seen it every way from the artist. For more music, go here.

"So to answer your question, I'm serious about making the best damn joke I possibly can with all my resources and blessings," he adds. "Also, DJ Gringo mixed the beat for me."