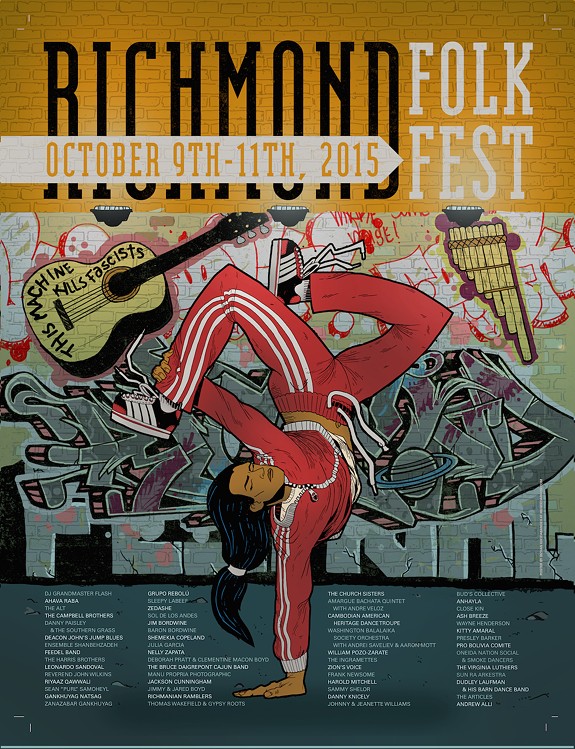 The reveal of the 2015 Richmond Folk Fest Poster is upon us.

Now it’s official: we can get excited for the city’s biggest weekend of free music, cultural harmony, and diverse festival grub by the mighty James.

It’s basically only a month away and already one hopes we’re due one of those gorgeous weather weekends, the kind where the crisp, clear air seems to inflate your heart while cartoon bluebirds fly ‘round your head. Or something.

This year’s poster was created by local artist, Bizhan Khodabandeh, using some familiar visual shout-outs to folk icon Woody Guthrie (“this machine kills fascists”) and the early hip hop scene – which will be represented at the fest by the one-and-only Grandmaster Flash. I haven’t found Sun Ra Arkestra yet, but I’m sure they’re in there somewhere (well there’s a planet with rings right in front, that could be it).

Khodabandeh is a 34-year-old local designer, illustrator, artist and activist who freelances under the name Mended Arrow and teaches at VCU 's Robertson School of Media and Culture. When asked about his process for the poster, he broke it down for us:

“With the folk fest encompassing so many genres, there are really only a few ways that I could think of to approach the poster. I decided to go a similar route as last year's poster by Leslie Herman who focused on one genre while giving a head nod to another performance or two. I chose to highlight hip-hop in my poster since one of performers is DJ Grandmaster Flash, an important figure in the history of hip-hop.

After a lot of sketching, I presented three possible solutions. One isn't worth mentioning. Heh. One design indirectly referenced hip-hop culture via a vector illustration of a boom box that also incorporated the James River skyline. The other solution was a b-girl surrounded by various instruments. The organizers went with the b-girl. For the final illustration, I gave the b-girl a graffiti backdrop of the words, Richmond Folk Festival, as well as some instruments that were made to look like they were painted on the wall. Typically, I make illustrations by digitally coloring a pen/ink drawing. That's how I did this one, but I illustrated each element separately to give me some wiggle room with the composition. This made it easier to make any revisions. While in college, I painted live at a handful of regional hip-hop festivals and used to be the art director for a small underground Richmond hip-hop publication that also held it's own festival. It was fun to flex those muscles again.”

You can buy the poster at the festival itself or at today’s reveal, currently underway at the Glave Kocen Gallery from 5:30 to 6:30 p.m. The 2015 schedule was also just released at the festival home page.