Watch local musicians play with musical heroes over the weekend. 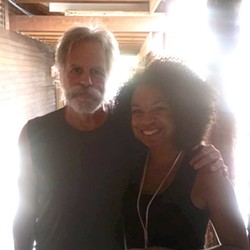 It's always nice when you meet a personal hero and he or she delivers. One of the places where this has the best chance of happening is onstage, when the hero is a musician and ego is left behind in favor of making music together.

Over the weekend three well-known local musicians found this out firsthand, sitting in with widely known musical heroes for moments that will make good stories for years to come: First off, Tony Foresta, lead singer for Municipal Waste and Iron Reagan, sang lead vocals with his punk heroes, the Descendents for a major highlight of Saturday's Gwar B-Q at Hadad's.

Foresta publicly posted a photo on Facebook with the text: "Here's a picture of me singing for my favorite band. I've never been more nervous in my life. I cried while singing, it was so much fun." Check out video below of Foresta singing "Thank You" from the band's 1996 album "Everything Sucks."

Then, outside of town, after the revered jamband Phish played a big show at Merriweather Post Pavilion, local drummer Dusty Ray Simmons (DJ Williams Projekt, Big Payback, Fear of Music) was performing during the after-party at a nearby bar called Nottingham's when he was joined by Phish bassist Mike Gordon for a funked-up take on the Little Feat classic (via Robert Palmer version) "Sailin' Shoes."

"He stood right up front for 30/40 minutes paying close attention to Todd Herrington and visibly enjoying himself. Next thing I know he's stepping on stage and Todd's handing him his bass and Mike says to Todd 'I was having such a good time watching that I didn't want to sit in.'

The vibe was instantly great and was super, super funky. There was a lot of eye contact and smiles shared between us and the occasional 'Whew!!' from Mike. I never really thought a lot about what it might be like to play with him but it felt very natural and easy to lock up. We all had a blast and it's definitely an experience I'll always remember."

Check out a rough video below, where it's a little hard to see Dusty in back, but you can definitely hear him working out the skins.

In more jam-related royalty news, hot local singer Samantha Reed (Sam Reed Syndicate) sang on Sunday with Keller Williams at the Peach Fest in Scranton, Pa. and was joined by none other than original Grateful Dead member Bob Weir. Reed posted about the experience on Facebook alongside a photo of herself with Weir (above):

"This guy really filled my heart today. I knew he was coming but the feeling just caught me off guard. I am totally inspired and overwhelmed by the power of word and sound. Music changes lives, music saves lives. Thank God for the true vessels and the angelic presence around them. Seriously lol. To carry and deliver for so long has got to feel like a burden sometimes. The gift and the curse. I am thankful for this service and its providers. I hope to have such longevity. I wanna make an impression.

Check them out doing a Deadhead favorite, "Eyes of the World."