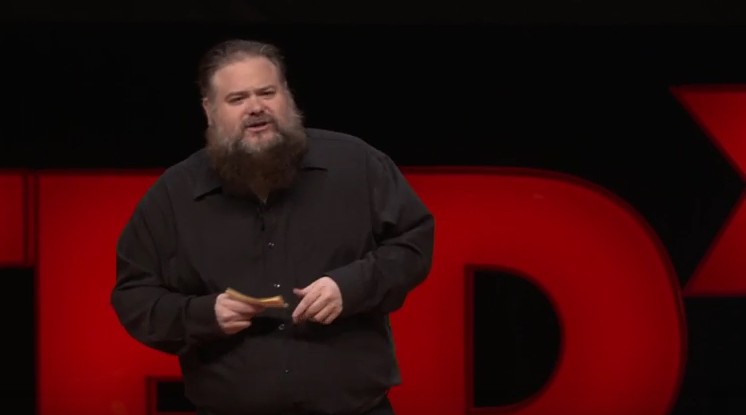 You never know what will go viral these days. Numerous media outlets including Rolling Stone, Spin, Nerdist, Pitchfork and others have been posting a video of longtime Gwar member, Dr. Michael Bishop, speaking about the metal group's history in Richmond. The video was also trending at number one on Facebook (right above a story about Dave Matthews Band recalling when it dumped its own bus sewage onto people).

Bishop, whose fiery preacher upbringing in Hopewell we wrote about in this Kepone article, is a gifted musician and speaker, so he's fun to watch onstage. But a number of media outlets seem to think this talk happened recently -- nope, it was back in April and the video was just posted. Also, echoing headlines are heralding the speech as somehow both "intriguing" and "insane." Hmmmm, seems pretty straightforward to us; what may be shocking people is that a goofy metal band guy could also have a PhD from University of Virginia. There isn't much controversial or strange in the talk, unless you still find shock rock violence controversial.

It's a quick deconstruction of the band's "uncommon" image (which was the conference theme this year).Bishop tells the audience about the band's formative years in Jackson Ward, then talks about how he and the group played to its hometown's long and sordid history of violence within their own image and storyline -- showing how Gwar cleverly reflected and reminded the city of its bloody roots and it's continuing death merchants.

"Slavery is a central concept to Gwar," he says, noting the group's production company name of Slave Pit, and its fans referred to as slaves. "But we can't divorce that word from the concept of slavery, especially in Richmond, Va."

Bishop notes that "like it or not, Richmond, Gwar is one of your most recognized cultural products." After considering the Civil War and tobacco industry, he calls Gwar one of the "safest things" things to ever come from Richmond -- closing with a nice zinger.

Check it out for yourself. Then go start your own clever art project.