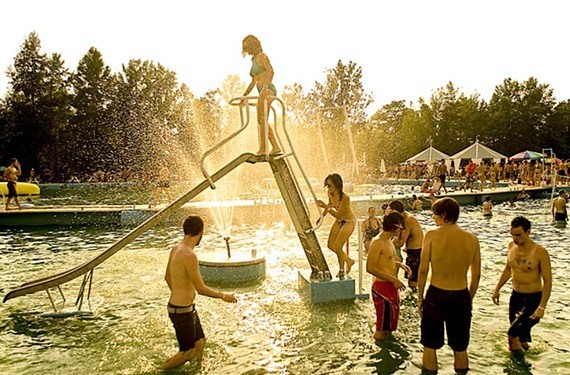 It's never pretty when best friends fight. But when Best Friends Days go at it, forget about it.

Indigo RVA, which calls itself a "new event hosting platform for local artists, non-profits and small businesses," is finding out the hard way after trying to launch with a premiere event called "Super Happy Mega Best Friends Day." It's scheduled to be held Aug. 30 at Hadad's Lake.

The only problem? A popular trademarked event was held at Hadad's for 10 years called Best Friends Day. It retired in 2011, but those organizers are angry that their name is being used. So they took to Facebook to let people know they are uninvolved.

"No one approached us. Whoever it is, is insinuating it's Best Friends Day and for us that sucks," says Chop Suey Books owner Ward Tefft, who was an organizer for seven years with BFD. "We put a lot of hard work into that, made a decision to stop doing it for a particular reason. ... People will think it's us again."

Style contacted Indigo RVA. An organizer agreed to an interview by text message last night on the condition of anonymity, saying he or she had concerns about personal safety. The organizer responds:

We booked Those Manic Seas early on once we confirmed the venue with Ron Hadad. After the internet trolling today, Those Manic Seas have asked to not be associated with the event. Ron Hadad has concerns as well. My partner and I have been personally threatened and have gone into hiding which is why I am hesitant to give my name here. I would rather keep it out of the publication if possible.

The reaction by the community was swift and very harsh. I've never endured such an onslaught of hate before. People sabotaged our event, our brand and even threatened our personal safety. At one point, someone even pretended to be us and began commenting. It is very bizarre. The whole thing is just crazy.

We meant no harm, we just wanted to create a fun event that would get our new promotional company some positive exposure. My partner and I now fear we may have to cut our losses, break our contract with Hadad's, cancel the event and rebrand our fledgling business venture.

We wanted this event to get our name out there and do some good, too. Proceeds will go to support the local nonprofit organizations Kinsfolks Community and Carverponics.

I tried to laugh it off and made the mistake of trying to respond to the trolling. As of now, the future of the event is uncertain. What is certain is that there is a gang of grown-up bullies in this town and they are ready at any given moment to take to the internet and crush someone's dream in a matter of hours.

With the event less than a month away, we spent a lot of money on promotional materials. We made flyers and posters right away so we wouldn't waste any time promoting the event around town. We only had one band confirmed on the poster, but we were in talks with others to play the event so we just went for it anyway.

Now that they are nervous about being associated with the event, we may have to just eat our losses for the printing costs and promote the event digitally if we continue it at all.

This has all happened so fast so we have to regroup on our end and determine the best course of action. If it's not too late, we may have to switch the name of the event to "Mean ol' Bullies Day" or something.

I don't blame the [BFD folks] though really. Truth is, we knew there would be some sort of response to naming the event after a popular event held in the same venue for a decade or so. We wanted that name recognition and to build upon the hard work from organizers before us. We figured any drama that came out of it would just generate buzz for the event to be honest. We should have reached out to them first and asked them permission. Even gotten some tips from them. We are still very new at this and have a lot to learn.

We underestimated the backlash and overestimated our ability to control it. I hope the previous BFD organizers can forgive our mistake and support us if we change the name of the event.

Let this be a lesson to people out there I guess. Don't take shortcuts and try to pass something off as yours when others worked years to build it.

Style contacted Ron Hadad to see if the whole thing was a prank -- considering that people apparently are impersonating each other online as well as remaining anonymous.

"It's not a prank, but I think they're going to change the name," Hadad says. "They haven't put their deposit down yet."

Tefft says that if anyone was threatened online, that's another story -- but he didn't see anything of the sort.

"Everything I saw on there was funny. If he gets threatened, that’s a legal matter at that point," he says, adding "While we’re not supporting this guy, we also love Ron Hadad and we would never stop anyone from going there. Best thing I would say -- if they still do it, people should go to Hadad's, pay regular price, not the extra [ticket] price, check out some half-assed shit and get back to us and let us know how bad it was."