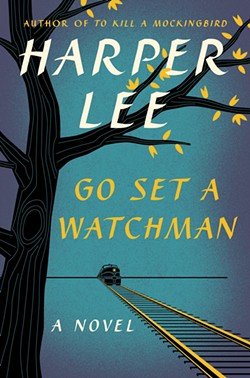 When Harper Lee’s novel “Go Set a Watchman” hits bookstore shelves next week, it will give millions of ardent fans their second visit to Scout Finch’s Maycomb County, Alabama.

And they only had to wait 55 years for the chance.

Locally, fans can welcome the new book at a release party at the Jefferson Hotel’s Lemaire restaurant Monday, July 13. The fete kicks off at 10 p.m., as a warm-up for the book’s official release at the stroke of midnight.

While Lee wrote “Go Set a Watchman” before “To Kill a Mockingbird,” it survived only as an unpublished manuscript until this year. There’s a mess of online reading, full of controversy and conjecture, available to anyone curious about why the book is only now reaching print. Lee, 89, isn’t talking. She resides at an assisted-living facility in Monroeville, the same town where she grew up, and she famously shies from giving interviews.

“To Kill a Mockingbird,” released in 1960, tells the story of two children growing up in small-town Alabama as their father Atticus defends a black man on trial for the rape of a white woman. “Watchman” is about the grown-up Jean Louise “Scout” Finch, returning to Maycomb County 20 years after leaving home for New York City.

Ward Tefft, owner of Chop Suey Books, says the bookstore’s staff started talking about an event soon after the book’s publication date was announced. It isn’t the first time Tefft has held a midnight book-release party (Haruki Murakami’s “The Strange Library,” last year). But recognizing the occasion was a no-brainer.

“We had to do it,” Tefft says. "'To Kill a Mockingbird’ is such an important piece of American literature that we wanted to jump on board.”

The new book is the No. 1 pre-order on Amazon. Tefft says his store has received more pre-orders for this novel than it has in a long time.

Buyers who pre-order “Go Set a Watchman” at Chop Suey will get a 10 percent discount up until the night of the release. This isn’t the first splash Harper Lee has made here in town. Nearly 50 years ago, the Hanover County School Board voted unanimously to ban "To Kill a Mockingbird," on the grounds that it was “improper for our children to read.” The decision was reported on the front page of the Richmond Times-Dispatch dating Jan. 5, 1966. Lee fired off an angry letter to the paper later that month. In it, she accused the school board members of illiteracy and enclosed a $10 donation to the Beadle Bumble Fund to purchase copies of the book for county school kids.

“I enclose a small contribution,” Lee wrote, ending her note, “that I hope will be used to enroll the Hanover County School Board in any first grade of its choice.”

“Fifty years ago we were debating whether the book should even be in print,” Tefft says. “Now it’s printed in just about every language there is.”

Admission to the release party is free. Expect themed cocktails -- Tequila Mockingbirds and perhaps the Bob Ewell, a mix of several liquors within arm’s reach -- and a book- and movie-based trivia contest.

No word on whether dressing as your favorite “To Kill a Mockingbird” character will get you any pull at the bar. But showing up in Scout’s paper-mache-and-chicken-wire ham costume likely would go over well. Of course, Scout herself could show up -- Mary Badham, who played the youth in the famous film, lives in the Richmond area.

Here's a preview of the PBS television special about Lee airing tonight at 9.