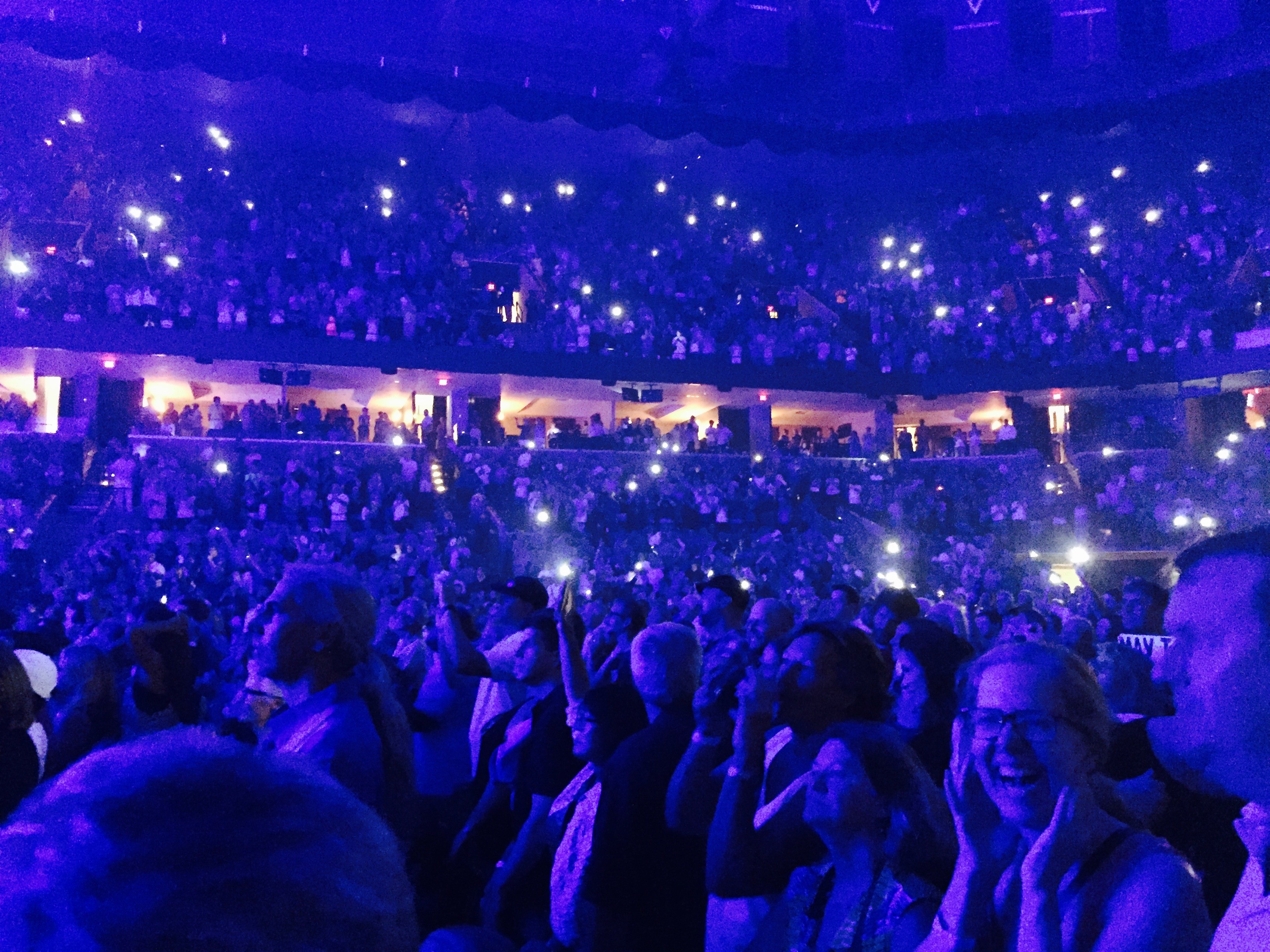 On Father's Day, when I told my pops I was going to see Paul McCartney in Charlottesville, he asked a pretty good question.

"So why on earth does a guy in his 70s, who has more money than he knows what to do with, still want to put himself through the rigors of touring, playing the same songs every night?" he asked me.

We both suspected it had something to do with an addiction to the adulation of fans who have worshipped the bassist since he was a young member of the Beatles, probably the most influential and revered band in pop music history.

But after witnessing McCartney command the stage for nearly three hours last night at an almost sold-out John Paul Jones Arena, where he dug deep into his legendary catalog from rare Beatles tunes to Wings songs and more recent solo material, the answer seemed more simple: At 73 years young, McCartney simply loves to rock out. You can see it on his still boyish face. He was relaxed and having a grand 'ole time.

Forget about the Kanye collab -- that was probably just cooked up by some record exec in hopes of introducing Sir Paul's music to younger generations. The man himself knows where his bread is buttered.

Watching him lead his four-piece band as they tore through "Back in the U.S.S.R" it was evident that he could play any hipster dive bar in America and blow whomever he pleased off the stage, no matter what age they were. He can still sound like a kick-ass garage band whenever he wants -- the days at the Cavern Club aren't that long gone.

Earlier, outside of the arena, sweating in line at will call, I could hear McCartney and his band performing soundcheck inside, which sounded like a good show on its own. For setlist nuts, he played several songs that wouldn't appear later that night but might later this tour, including "Birthday," "I'll Follow The Sun," (Beatles) "Bluebird" (Wings) and a cover of "Midnight Special."

The concert started a little after 8 p.m., following the PA blasting remixed Beatles tunes and rarities (big band takes, jazzy covers, techno house versions) set to an artful montage of videos on the large screens flanking the stage. It was the first time I've seen an artist play his own songs before a concert, but if anyone could get away with it, this guy could -- so many stars have covered his music.

The long and hit-packed show then kicked into high gear and pretty much stayed there, settling into a formula of cherished rockers divided up by lovely, instantly familiar ballads.

Not surprising, all aspects of the production were top-notch from the sound and choreography to the lighting. But one thing you notice right away is how loud McCartney likes his drums. He has a a true beast behind the kit, Abe Laboriel, Jr. -- the second most entertaining person on stage, bobbing his head to the music and providing backup vocals. All the band members sang back-up throughout the show. That's not to say that McCartney's voice was not still strong -- it was impressive at times. He can't quite hit the high notes as well, but really you don't notice it much. He fades back a little on the really high parts and lets the others help out. Plus the mostly older audience never stops singing along as well.

The first set surprise came about four songs into the show, with a rollicking take on the Beatles song "One After 909" from "Let it Be" -- one of the first songs he wrote with John Lennon, he told the crowd. McCartney, who started the show in a blue jacket but quickly lost it -- noted that his wife was in attendance before dedicating the sultry piano slow number "My Valentine" to her. After some Wings classic rockers ("Maybe I'm Amazed" was a crowd favorite) McCartney played a wonderful version of the countrified Beatles number "I've Just Seen A Face" from the album "Help!"

Other personal favorites included the barrelhouse piano boogie of "Lady Madonna" and the soulful pop of "We Can Work It Out" -- which came close to being as good as Stevie Wonder's cover version.

The legendary bassist told stories between some songs, most of which he admitted, people had heard many times before. Of course, people in the crowd held up silly signs, hoping the singer might fart in their direction, but really the signs just blocked fans behind them, who had paid $300 a ticket, from seeing the band fully. McCartney noted the signs from the stage but also described them as mostly distracting from his performance.

Yes, this was an older crowd, but some of them still had that crazy, obsessed look from the Beatlemania days.

At one point, McCartney brought a couple fans up on stage: One woman from North Carolina had a sign saying something about her advancing "wrinkles" then she asked McCartney to sign her arm because it had fewer wrinkles. That wasn't weird at all. Then a mild-mannered gentlemen with a sign noting that it was his 100th show came up, got a hug and a handshake from Macca and left the stage looking very pleased, after thanking his wife for "100 hall passes."

There was an acoustic mid-section of the show, where McCartney performed the song "And I Love Her" with its lovely, haunting melody before a stage platform began to rise and he sang "Blackbird" which he noted he wrote as a response to civil rights abuses in America during the '60s.

After several new songs from his most recent album in 2013 that went over well, especially "New," McCartney began the big finale before the long encore. As I mentioned, "Back in the U.S.S.R" was exceptionally rocking, then came a moving version of the classic "Let It Be" that had the crowd swaying in unison. I shot some video mostly of the video screens below.

"Live and Let Die" had some major pyrotechnics added to the mix, with what sounded like canons going off and constant balls of flame being shot into the air. Then a perfunctory "Hey Jude" with orchestrated sing-a-long from the crowd led the main set to a close.

The eight-song encore opened with another Beatles rarity, "Another Girl," and soon featured a raw "Helter Skelter" that, probably wisely, avoided any bloody imagery from Charles Manson murder scenes on the video screens; that would've harshed everyone out. He then closed with the trilogy that finishes off the Beatles "Abbey Road" album, allowing him to conclude the night with his simple but poignant lyric from "The End": "And in the end/the love you take is equal to the love you make."

Then the confetti came raining down like a championship sports game had just ended.

"I think we had fun tonight, didn't we?" McCartney asked the crowd.

Got to Get You into My Life

One After 909 Temporary Secretary Let Me Roll It (w/ "Foxy Lady" snippet) Paperback Writer My Valentine Nineteen Hundred and Eighty-Five The Long and Winding Road Maybe I'm Amazed I've Just Seen a Face We Can Work It Out Another Day Hope for the Future And I Love Her Blackbird Here Today New Queenie Eye Lady Madonna All Together Now Lovely Rita Eleanor Rigby Being for the Benefit of Mr. Kite! Something Ob-La-Di, Ob-La-Da Band on the Run Back in the U.S.S.R. Let It Be Live and Let Die Hey Jude Encore: Another Girl Hi, Hi, Hi Can't Buy Me Love Yesterday Helter Skelter Golden Slumbers Carry That Weight The End
Prev
Next