Includes secondary season, The Cellar Series, to launch in fall. 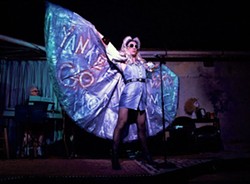 From the press release department: TheatreLAB has announced its 2015-16 season, “A Vivid Impression of Reality.”

Katrinah Carol Lewis is Billie Holiday in "Lady Day at Emerson's Bar and Grill" by Lanie Robertson; The time is 1959. The place is a seedy bar in Philadelphia. You’re invited to spend an evening filled with personal tales of difficult choices, bad breaks, worse men, and some of the most glorious songs ever written. It’s an intimate evening, up close with a legend – so pull up a chair and order a drink, because she’s got a life to sing. Directed by Deejay Gray; Musical Direction by Anthony Smith; November 12 – December 12, 2015.

"Bad Jews" by Joshua Harmon; The night after their grandfather's funeral, three cousins engage in a verbal - and sometimes physical - battle. In one corner is Daphna Feygenbam, a "Real Jew" who is volatile, self-assured, and unbending. In the other is her equally stubborn cousin Liam who has his shiksa girlfriend, Melody, in tow. Stuck in the middle is Liam's brother, Jonah, who tries to stay out of the fray. When Liam stakes claim to their grandfather's Chai necklace, a vicious and hilarious brawl over family, faith, and legacy ensues. Directed by Debra Clinton; produced in partnership with the Weinstein JCC as part of the 2016 Acts of Faith Festival; February 18 – March 5, 2016.

"Venus in Fur" by David Ives; Thomas, a beleaguered playwright/director, is desperate to find an actress to play Vanda, the female lead in his adaptation of the classic sadomasochistic tale Venus in Fur. Into his empty audition room bursts a vulgar and equally desperate actress - oddly enough, named Vanda. As the two work through the script, they blur the line between play and reality, entering into an increasingly serious game of submission and domination that only one of them can win. Directed by Matt Shofner; co-produced with Spin, Spit & Swear; Featuring Maggie Roop as Vanda; April 14 – May 7, 2016.

"Tribes" by Nina Raine; Billy was born deaf into a hearing family. He was raised inside its fiercely idiosyncratic and politically incorrect cocoon. He has adapted brilliantly to his family's unconventional ways, but they've never bothered to return the favor. It's not until he meets Sylvia, a young woman on the brink of deafness, that he finally understands what it means to be understood. Directed by Deejay Gray; July 14 – August 6, 2016.

In addition to a four show main stage season, TheatreLAB is proud to announce The Cellar Series, a second season of four shows with shorter runs, smaller budgets, and edgier, unknown or new scripts. Material will be pulled from local playwrights and fringe festivals worldwide to find the stories that can be successfully produced with minimalist design elements without sacrificing intrigue or possibility. The Cellar Series will be used as a springboard for actors, designers, and directors in the early stages of their careers to broaden the number of artists working professionally in our community. The Cellar Series will be a platform for bringing eclectic performance art to The Basement, as well as revive old Richmond favorites, like the “Six Block Series” from the beloved Sycamore Rouge. As always, TheatreLAB strives to encourage emerging artists and provide quality theatre to the greater Richmond area and The Cellar Series is the perfect addition to the growing company’s artistic endeavors.

In an additional effort to give back to the community, the artwork created for each show by TheatreLAB Associate Artistic Director, McLean Jesse, will be auctioned off during the run with proceeds benefitting the community partner attached to the project.

All productions will run at TheatreLAB’s new home, The Basement, at 300 East Broad Street in Richmond’s Arts District.