Art contest seeks to identify and create iconic feature for the James. 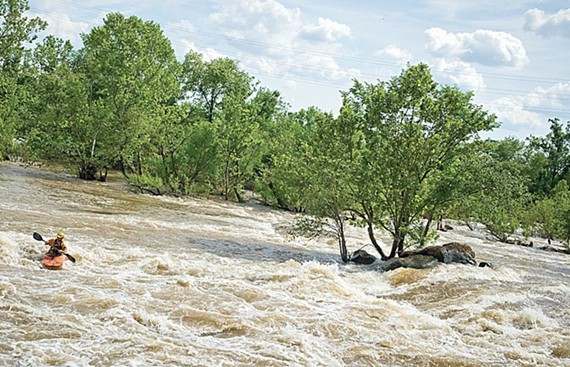 St. Louis has that big arch thing. Why don't we have some iconic image for our crowning natural feature, the James?

The James River Association is holding a Regional River feature contest that seeks "to identify or create an iconic regional river feature (or features) that symbolizes, creates an identity for, and celebrates the rivers of the Richmond region." They list local projects to derive inspiration from as: Richmond’s Rockfish, RVA Street Art Festival, and the Jefferson Pocket Park Design Competition.

The contest is open to residents of the Richmond region and submissions will be accepted through Aug. 10. They'll be accepting submissions including, but not limited to the following:

From the website: "A committee assembled by the James River Association will review all submissions and select finalists for public voting. The winning submission will be announced during the final presentation of the Regional Rivers Plan in September and included as one of the catalytic projects recommended in the plan for implementation."

Here's more information that you might need to know:

Submissions will be evaluated according to the following criteria:

Feasibility: Is the proposed project financially feasible? Can it realistically be implemented, installed, or constructed? How much maintenance will the project require?

Resonation: Will the feature or proposed project appeal to the general public? Will the project be a riverfront attraction?

Awareness: Will the feature or proposed project build awareness of the James River and other rivers of the region? Will it symbolize, create an identity for, and/or celebrate the rivers of the Richmond region?

Public Benefit: What are the public benefits associated with the proposed project? Will it improve aesthetics and/or create an attractive public space for residents, visitors, and passersby to enjoy the river?

Submissions must include the following items:

Project Narrative: The project narrative should describe the proposed river feature project in enough detail for the review committee to understand precisely what is being proposed. Consider the evaluation criteria for submissions in the narrative.

Conceptual Design Plan (optional):A conceptual site plan in color with location of physical elements, landscaping, and relevant improvements should be included. Design concepts to consider include:

Interpretation of natural environment and history

Submit one copy of all required materials described above in a sealed envelope by August 10, 2015 to: