Suzanne Hall To Retire From VMFA 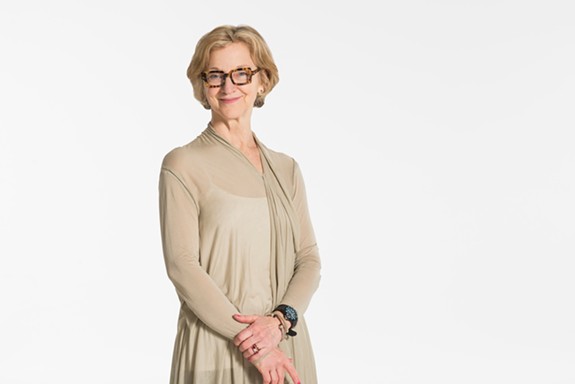 After three decades, Suzanne Hall is ready to leave what she calls one of the best jobs in town, especially for an arts lover.

Hall, a longtime public relations specialist with VMFA, is retiring next week. After traveling for a month, she will become the director of stewardship and development at her longtime church, St. James Episcopal, beginning July 1.

Hall will be awarded tonight with "a lifetime achievement award of sorts" when she receives the Thomas Jefferson Award for Excellence in Public Relations, exemplifying the best in the profession at the Virginia Public Relations Awards.

Sitting in the Best Café at the museum, Hall reflected on how far the museum has come during her tenure.

“It was much more reserved when I got here, more your grandmother’s museum, very scholarly, very academic,” she says. “Less of a humming hub of activity.”

She recalls highlight community events such as Jumping in July and the iconic Fast Forward concert series that brought experimental cutting-edge artists such as Sun Ra, Philip Glass, Meredith Monk and Steve Reich to the museum. And of course, the pinnacle was the 2011 Picasso exhibit, she says, which generated $30 million for the state.

“I will really miss being on the inside and working on shaping messaging and agenda setting,” she says, adding that the museum already has ideas for the influx of visitors coming in the fall for the world bike championships -- but still needs to raise the money to implement them.

Also the museum is hoping to engage younger audiences with its next big exhibit, “Japanese Tattoo: Perseverance, Art and Tradition” that opens May 29 and runs through Sept. 27.

”What I’ll miss the most are my colleagues; this is a passionate and talented staff,” she says. “And this is a beautiful and elegant, revered space. On the inside, it’s hard work and long hours. Resources are frequently less than you would have in a for-profit. But to be able to live and work among this art . . . now, post 2010, its not just about the art and tours and exhibitions, but more geared toward the experience.”

Hall says she was offered a buyout before the museum reopened in 2010 after major renovations, but she wanted to see the transition through. She had planned to leave three years after the reopening but wound up staying an extra two years.

If you're considering applying: She says the ideal candidate for her job will need a lot of energy and a real passion for the arts.

Given her close work with social media, Hall says she has noticed a swing in how the public approaches the museum.

“I have witnessed firsthand the pride and the enthusiasm about VMFA from our users and visitors,” she says. “We’re continuing to grow in a way that is diverse, which is essential for the vitality of any organization.”

Looking forward, she says that communication will remain one of the institution's biggest challenges. "It's no single person's responsibility. But we have grown exponentially since reopening, and our internal communications system needs to grow as well."

She does get a lifetime membership to the museum upon retirement, she says, and don't expect her to be a stranger: "Some of my dearest friends hang on the walls here."