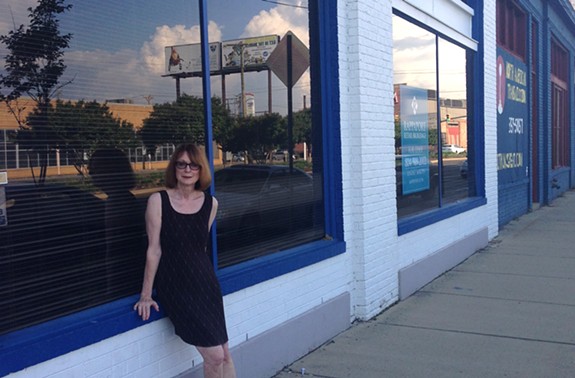 Call it the seven-year itch. Gallerist Geraldine Duskin was looking for a change.

Ghostprint Gallery, a fixture on a key block of the arts district, is relocating to Scott’s Addition come June 1. Like a marriage that’s weathered almost eight years, myriad factors -- including daughter Thea Duskin, a sought-after tattoo artist who maintained a shop at Ghostprint, moving to Buffalo, New York -- went into her decision to move on.

“I love change,” Duskin says, “even though I feel it’s a little bittersweet leaving Broad Street.”

Impressed by the energy of First Fridays, Duskin conceived of monthly Antiques on Broad events and Thursday preview nights, more relaxed opportunities to view new shows, as a way to bring visitors in on other days. Still, it was challenging.

“There are still people who won’t come down to Broad Street,” she says.

Part of that, she believes, is the designation of the area as a business arts district. “I wasn’t pleased about that,” she says. “I felt it was diluting our whole being. It’s a no man’s land between us and the commercial area downtown. The idea that people would take incentives to start businesses here, I haven’t seen that happen. All those empty store fronts, why not give them to VCU graduates in fashion and design for a year and see what they could do with them? As it is, it looks sad and uninviting.”

Like many business owners along Broad Street, she’s also not convinced that a high-speed bus route down the middle of Broad that will appropriate some parking spaces as well as the center lane will ultimately benefit the area. “I’ve seen people drive up, look for a parking space and drive away because there’s so little parking on Broad already.”

But there are also things she’ll miss, such as being close to her gallerist friends, Lift and Nick’s Market, where she only has to walk in and they know her order. “I’ve made tremendous friends and connections since I came here. Richmond has been a good place,” she says.

The new space sits squarely between Fat Dragon and a transmission shop. It’s a juxtaposition she relishes. “I’m taking advantage of new energy here,” Duskin says from the airy Boulevard space, formerly a motorcycle shop. “The gallery’s visibility is wonderful with all these new lofts around here.”

In fact, her neighbors on either side demonstrate the shifting face of Scott’s Addition with the transmission shop typical of the area’s original industrial roots while the restaurant and re-imagined Ghostprint represent the neighborhood’s burgeoning hip status.

Her intention is to follow her vision by broadening the gallery’s focus in the larger space. Exhibits of contemporary painting will continue with the first big show in September, but she’ll expand to offer art jewelry curated by Kathy Emerson, a co-founder of Quirk Gallery.

Using her experience in theater, galleries and interior design, Duskin will also offer design services, working with clients to enhance how home furnishings and art collections co-exist. “Many people don’t have the visual imagination to picture things as they might be and this will give me the opportunity to present that. It’s all about creating a beautiful picture," she explains. As part of that, she’ll stage vignettes with art within the gallery, programming thematic shows where disparate elements complement each other.

Renovations to the new space are just beginning so she’s planning a soft opening for summer as she settles into new digs. But beginnings necessarily follow farewells, so artist Therin Brooks will be in town to close her show “Signes and Symboles” on May 29 from 5 to 8 p.m. “We invite people to come and say goodbye.”