Keep an eye out for Lumbergh from "Office Space." 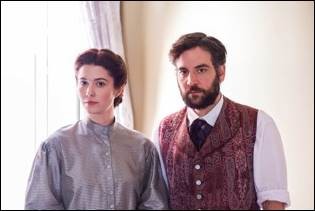 The cast was announced today for "Mercy Street," the locally filming Civil War drama television series by PBS. The anticipated series, set in a Union-occupied hospital in Alexandria, will air on Sunday night in winter 2016, same night as the final season of "Downton Abbey."

The show, executive produced by Ridley Scott, David Zucker and Lisa Q. Wolfinger, has the potential to be better than most period series. I say this not just because one of the cast stars is Gary Cole, who you may recognize as the awful boss Lumbergh in "Office Space," or more recently, the hilarious Kent Davidson on HBO's "Veep."

Other reasons to get excited: The show also has some fine directors, including Roxann Dawson ("Treme") and Jeremy Webb ("Masters of Sex" "Downton Abbey") who should bode well for the production, which is being shot in the Richmond and Petersburg areas.

But back to poor Gary Cole. Everywhere he goes, people must say, "Uhm, yeaaahhhh, okay, greaaat" to him in that same, smug way. He is probably sick to death of TPS report jokes by waitstaff. So cut him a break out there.

Oh, and I'm already hearing eyewitness reports from the ladies that actor Josh Radnor is a cute-man walking. Really, after "Lincoln" you'd think that we'd be a little used to the whole celeb thing by now. To quote Sen. Lloyd Bentsen, "Radnor, you're no Daniel Day-Lewis, or Rob Lowe, or James Spader, or John Hawkes, or . . . (you get the picture)."

The rest of the cast, per the press release:

Mary Elizabeth Winstead (“The Returned,” “Smashed,” The Spectacular Now) as Nurse Mary Phinney, a feisty New Englander and widow who is a newcomer at Mansion House Hospital.

Josh Radnor (“How I Met Your Mother,” Liberal Arts, Broadway’s Disgraced) as Jedediah Foster, the civilian contract surgeon who grew up in a privileged Southern slave-owning household as the son of a wealthy Maryland landowner.

Peter Gerety ("Syriana," "Charlie Wilson’s War," "Flight," "God’s Pocket," “The Wire,” “Prime Suspect”) as Dr. Alfred Summers, chief surgeon at Mansion House, who has risen to the rank of major by virtue of his age, not skill.

Norbert Leo Butz (“Bloodline”) as Dr. Byron Hale, an old-school army surgeon who lives life by the book. While Hale has an eye for the nurses, he has an ongoing relationship with Nurse Anne Reading.

McKinley Belcher III (“Power,” “Madam Secretary,” “Chicago PD,” “Show Me A Hero”) as Samuel Diggs, a black laborer harboring a secret knowledge and ability in medicine, which he learned as a boy servant.

Shalita Grant (“NCIS: New Orleans,” “Bones”) as Aurelia Johnson, a beautiful, stoical ‘contraband’ working as a laundress at the hospital, and trying to bury her past.

Newcomer Hannah James as Emma Green, an entitled Southern young woman who volunteers as a nurse at Mansion House Hospital, the facility established on the site of her family’s luxury hotel.