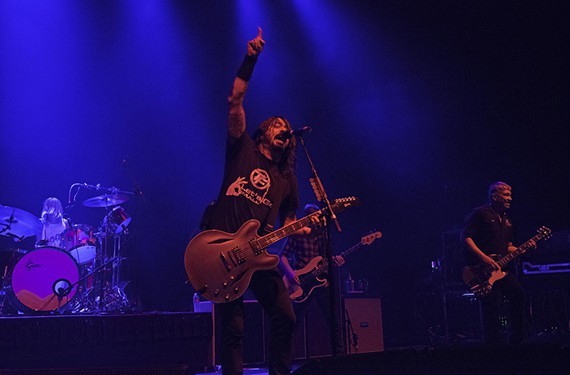 The organizers behind last September's crowdfunded Foo Fighters concert at the National have been nominated for a 2015 Webby, hailed as the "Oscars of the Internet" by the New York Times.

The four Richmond friends -- Andrew Goldin, Lucas Krost, Brig White, and John McAdorey -- are up for a People's Choice Award against "The Ellen Degeneres Show," the famous Oscar selfie, NachoVison, and an anti-racism campaign, #weareallmonkeys. You can vote here.

"It's amazing. We were just trying to get our favorite band into town. And that success, and the way it all happened so organically with the community, will always be the best part," says Goldin. "Rocking out with everyone who believed, knowing we all made it happen was really something special though, not gonna lie. All the extra stuff like this is still a ton of fun."

The Webby Awards, traditionally held in New York, have been criticized for charging nominees to enter and attend, but Goldin isn't worried about it. He's not even sure they'd attend.

"Haha. No idea. I don't think they pay for us to go out there or anything. Would be nice though. I'd love to if I can swing it. Maybe I'll crowdfund for the money. Kidding, of course."