A Q&A with Moxie LaBouche of Blacklist Burlesque. 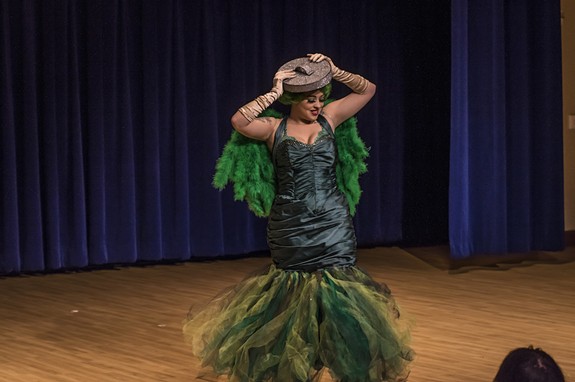 Moxie LaBouche, producer for Blacklist Burlesque, is bringing burlesque back to Firehouse Theater after a two-year absence.

This past weekend saw an encore performance of "The Lovers, the Dreamers, and Me...: a Burlesque Tribute to Jim Henson."

LaBouche specializes in a style known as “nerd-lesque” and has produced several sold-out show at Richmond CenterStage, including "The Princess Bride" and "Game of Thrones," both of which will be reprised later this year.

A press release noted that burlesque shows will be a regular part of Firehouse Theatre's schedule beginning this fall.

Style caught up with La Bouche for a quick Q&A.

How did this come about?

I've been producing burlesque for about two years, first with the troupe Those Freaking Weirdos, then solo under the banner Blacklist Burlesque. Jim Henson was one of many ideas in my notebook of potential shows, along with themes like video games, horror movies, animals and food. After the success of the "Game of Thrones: Burlesque is Coming" tour, which we were able to bring back to Richmond for an unprecedented encore, the time just felt right to mount the show whose theme was dearest to my heart.

Can you tell us what 'nerd-lesque' is all about?

Nerd-lesque is a portmanteau of "nerd" and "burlesque" and refers not only to burlesque of nerdy things, like "Star Trek" or Marvel comics, but can be burlesque of any pop culture property, such as "Game of Thrones" or "Princess Bride." It's unknown who said it first, but it was likely the product of simultaneous invention, popping into many people's minds independently. You can also see nerd-lesque locally in show produced by Ellie Quinn, "the duchess of dork."

Who is the main driver of the event?

Being the producer, I suppose that would be me. Burlesque is my creative outlet, though I approach producing as the business it is. As a performer, those few moments you share with the audience make all the weeks of preparation and pre-show stress worthwhile. There is no fourth wall in burlesque, so our performances are more like conversations with the audience than monologues. As a producer, my goals are to put on the most entertaining show possible for the audience, create a fun and supportive professional environment for my cast, and ensure that the local businesses that provide us with financial backing get their money's worth.

What were the biggest challenges?

One of the biggest challenges I ran into in the early stages of assembling this show was a case of great minds thinking alike. Seemingly everyone wanted to be Miss Piggy, Oscar the Grouch or Cookie Monster. That morphed into a struggle to represent as many Henson properties as possible, when we almost had enough Muppet Show submissions to do a show based solely on that.

Did you learn any interesting trivia about the Muppets?

My act is to the song "Mahna Mahna," recreating the routine by Kiki Von Kitsch (now retired) that inspired me to do burlesque in the first place. Oddly enough (or not, if you know my family), that was my parents' song. In researching trivia for our emcee to give during the show, I found out that "Mahna Mahna" wasn't written for Sesame Street, but was in fact originally composed for an adult film produced in Italy. My mother certainly didn't know that at the time.

Any fun stories from the crowd?

We, collectively, made a new friend: a lovely 101-year-old woman named Vera, who was there with her daughter and grand-daughter (illustrating a distinction between burlesque stripping and strip club stripping as well as anything ever could). She used to go to burlesque in New York 70 years ago, so she's seen the "real deal." After the show, her daughter asked if Dante the Inferno and I would take a picture with her, which we jumped at. Her daughter then said, "She's 101 and she's still working." I couldn't believe it; I guessed she must work at the library or volunteer at church or something. Vera said "I sit in a chair, by the door, at the sperm bank and when the men are leaving, I say 'Thank you for coming'." We about died.

So did you find a new appreciation for Jim Henson?

I don't know that this process has given me a "new appreciation" for Henson, but it definitely renewed my appreciation. We were a mutual admiration society of 220+ people that night and you can't help but get swept up in the love. That's the real reward of nerd-lesque, to celebrate the things you love with everyone else.