A teenage Iraqi refugee moves to Richmond and makes his stage debut as a suicide bomber in “The Human Terrain.” 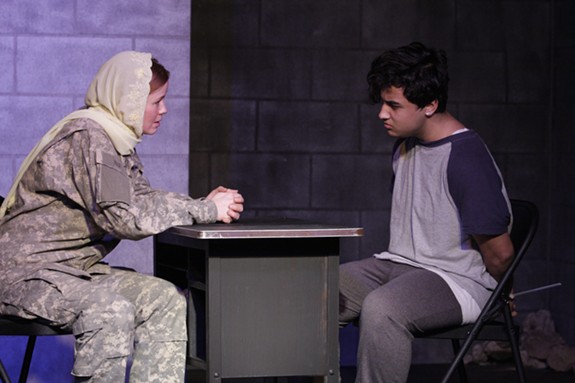 A 15-year-old Iraqi boy named Kemal stands holding two empty buckets, pleading in Arabic with a group of American soldiers to let him pass. His family is sick, they need water, an American anthropologist translates for the soldiers.

The tension is beginning to diffuse when suddenly the boy drops the pails and holds up a cellphone detonator, crying out “Allahu akbar!” (“God is great!”). The panicked soldiers take aim, ready to unleash a hailstorm of bullets.

Everyday Americans recognize the trajectory of this scene, and those like it, from movies, television shows and even the nightly news. But this drama is taking place onstage before an intimate crowd at HatTheatre during 5th Wall Theatre’s production of the “The Human Terrain.” No spoilers, but the scenario plays out differently than most.

As interesting as the scene may be the young actor who plays Kemal. Saleh Ismael is a 16-year-old Iraqi refugee who fled to Syria during the war and escaped the bloodshed there by moving to America with his family in 2009. This is his first role in a professional production.

“I didn’t do it for the pay, I did it for the fun experience,” Ismael tells me, saying he didn’t have a problem playing a suicide bomber. The play’s message, he says, is that people are not so different from one another. “All of us are growing through rough times,” he says, “but at the end of the day, a lot of us are alike.”

Originally nobody showed up at auditions to play the Iraqi teen. Judy Fiske, who works at Tabernacle Baptist Church, which has a large refugee population, saw a Facebook request by director Carol Piersol for an Iraqi actor and recommended Ismael. He had been studying drama at Glen Allen High School and had even written his own play.

Ismael says that "The Human Terrain," written by Ball State associate professor Jennifer Blackmer and in only its second U.S. staging, offered a different take on Muslims. It’s one, he says, he doesn’t see portrayed in American media images.

“When they show Iraqis here, they always show the crazy people. They don’t show the normal people,” he says. “It would be like [Iraqi television] only showing crazy rednecks from the U.S.”

For the Richmond production, Ismael translated parts of the dialogue into Arabic for the other actors, which is part of the play’s appeal – it doesn’t spoon-feed.

“When [the interrogator] asks him ‘Why did you become martyr’ he says ‘because my father was a martyr,’” Ismael says. “They don’t translate it for the audience. I say it to her in Arabic.”

“He was invaluable in teaching us all the phonetic Iraqi,” adds Piersol, who notes that Ismael nixed the prospect of his character wearing a hockey jersey in Iraq. “And he was very natural as an actor. The connection he had with the character, who is pleading because he is being tortured, was amazing.”

After last Saturday night’s show, Ismael met the playwright, Blackmer, who was in attendance for a Q&A session. “She said that I did great,” he recalls. “That I should keep doing this.”

It was only in the past five years that Ismael learned English, doing so by studying bilingual dictionaries. He then had to help his mom, younger brother and older sister, learn. “I needed to learn it quickly to help them adjust,” he says “But at first, it was really hard.”

Members of his large family escaped the war in Iraq for Syria, living there as it was beginning to slide toward brutal civil war. According to Reuters, more than 210,000 people – more than half of them civilians -- have been killed in that war. In Syria, his family struggled greatly, he says. His father is Sunni and his mother Shiite, which he says makes him simply Muslim.

“I don’t like to think divisively,” he tells me. “We’re all Muslims. We are all Iraqis.”

Ismael had cousins and friends in Iraq killed in American bombing, he says, yet he holds no ill will.

“To be honest, as a kid, I didn’t know what hate was – even if I had been angry,” he says. “I used to watch a lot of movies. I thought America was a dreamland, like when kids talk about Candyland. I had a lot of favorite movies like ‘Home Alone.’ I thought when you come here you will have a lot of fun, have a house of your own. Now I know you have to work hard for this stuff.”

Having moved around and seen so much, Ismael seems to have developed a steely self-reliance mixed with a philosophical curiosity beyond his years.

He does miss his friends back home and is still adapting to the differences between life here and in the Middle East.

“In Syria, people are more open. Here, people are more cautious. It’s like fear mixed with greed,” he says. “But my daily motto is always when you meet someone new, never ever judge him, because he’s going through struggles you know nothing about. Why not just smile? You might make his day.”

For now, Ismael says his family is doing well and that they live near his school in Glen Allen. As far as his own future, he hasn’t really considered an acting career, regardless of Blackmer’s praise. If given the choice, he’d rather be an R&B or pop star, he says. He loves singing in the school choir. “Music is the universal language of the world,” he says, before drifting back into a previous thought.

“If I could, I would sleep on the roof of my house, where all you see are stars and you can dream as far as you can. Nobody can bring you down. If you see a star it might already be dead and all you’re seeing is its shadow. Think of it as not dead, it’s not dead yet. Humans are like stars.”