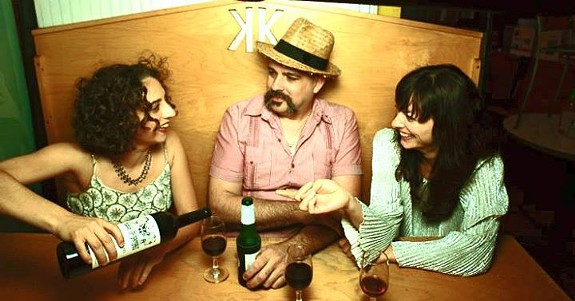 For years, local musician Nate Matthews says he was "stuck" to the rock scene and the occasional jazz show. He didn't go out for folk music regularly simply because he figured he could catch up during our massive annual folk fest.

That attitude changed once he started playing bass with the Richmanian Ramblers -- a group that performs Balkan folk songs in Romanian, Serbian and Croatian -- and he saw the interesting crowds the music drew.

"At first, playing and writing music from an origin I was not raised in was a novelty: two parts challenge, one part curiosity," he says. "Some time last year I looked around at a Richmanian Ramblers show and realized, 'Hey these wonderful, bright, quirky folk fans that I’ve slowly come to know as friends are onto something.'"

Some regular gigs for the Ramblers recently ended and they were thinking hard about what would work for the group in the future. With lead singer Antonia Vassar a mom, clarinetist Jason Scott a teacher, and Matthews and his wife (the band's percussionist) expecting a child -- they couldn't gig until 1 a.m. anymore, he says. So he met with deejay Bil Lipoletti (WRIR's "Global A-Go-Go" show) and both realized there was no regular folk music event for people who wanted to turn in early.

They conceived of the Traveler Series, a one Tuesday a month series that will feature many of Richmond's most interesting and unique folk groups. The series starts tonight at Balliceaux at 8 p.m. and features Richmanian Ramblers with Miramar, known for its slow-tempo, romantic Cuban-origin music. The show is $5 and there will also be "Bolero-themed cuisine and cocktails."

Matthews is hoping it's an idea that will catch on.

"We hope to have a mix of bands . . . Yeni Nostalji, Rattlemouth, Afro-Zen All-Stars. But even more so, many of us want to hear from unheard people, performers, dancers. Or maybe songs that someone’s been shoving in their closet," Matthews says. "I would love for a jug player to open for a clown. I mean, come on, who wouldn’t remember that for a long long time? That would, at least, change my whole damn week."