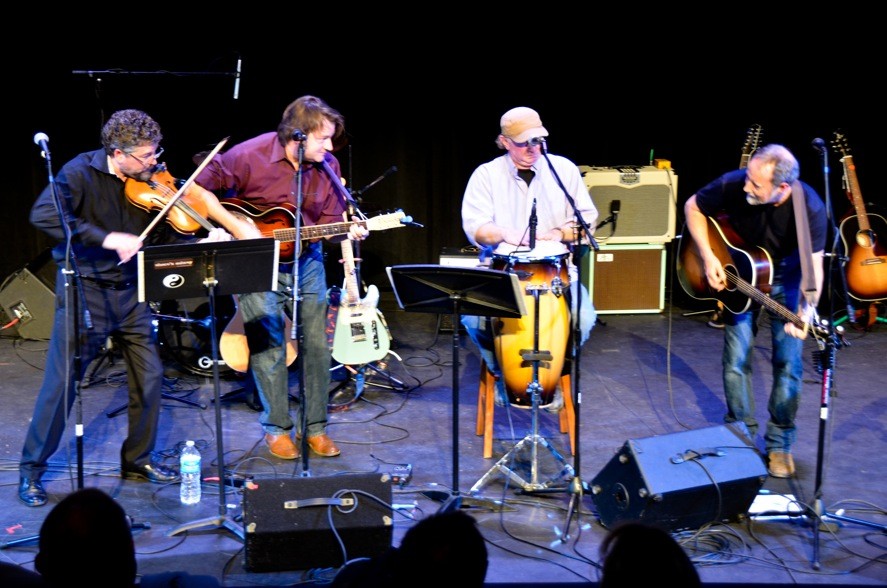 With a name like the Bitter Liberals, you might expect some hardcore political songs. But the origins of this roots Americana band are more relaxed.

“In the beginning, we were just doing it for fun,” says singer, songwriter and guitarist Allen Kitselman. “We didn’t set out to be a band. We just wanted to enjoy each other’s musicianship.” The group came up with its name: a nod both to politics and to fiddler Gary McGraw's favorite cocktail, the liberal, a mixture of bourbon, vermouth and Amer Picon, a hard-to-find French aperitif.

The four veteran Northern Virginian musicians, who play the Tin Pan listening room April 10, admit they've had a convoluted musical history. Each has played with several bands before they came together in 2011 to form a group that has already issued two CDs and won attention throughout the region.

Kitselman grew up in Waterford, began playing guitar at 9, studied architecture at Virginia Tech, and went on to become a founder and frontman for Genghis Angus, the celebrated 1990s band that issued four outstanding CDs and toured nationally. However Kitselman stopped performing in 1999 to concentrate on his architecture practice and family -- wife Laura and son Dylan -- as well as his role as a city councilman in Berryville.

Kitselman continued to write music and to play his guitar for his own pleasure, but he thought he'd “shut the door and thrown the key away” on his performing career. In late 2011 that all changed when his Clarke County neighbor Gary McGraw came to a party at his home. Kitselman brought out his guitar and played a few songs for McGraw, who recalls that “things just clicked.” McGraw, a classically trained violinist, showed up with his fiddle a couple of days later. A short time later, McGraw invited Clark Hansbarger, a retired English teacher, to join them on guitar and vocals. Kitselman recruited childhood friend and former Ghengis Angus percussionist Mike Jewell to play drums. The Bitter Liberals were born.

McGraw has played the violin since he was 3 and as a very young man he played at Carnegie Hall, the Kennedy Center, the Omni, and Disney World and with all-state high school orchestras in Texas and Tennessee. He also toured Europe with a youth orchestra playing in Notre Dame Cathedral, and Royal Albert Hall, among other venues.

As a student at the University of Virginia, McGraw performed with the Charlottesville Symphony as well as with several bluegrass groups. His other group, Where's Aubrey, began recording original music in 2001, and has now has recorded six CDs. McGraw has long admired the legendary French violinist Stephane Grappelli who years ago played with the Hot Club of Paris. He even plays a violin made in Paris between 1750 and 1800. While not playing music, McGraw raises two boys with his wife Amy Barley, writes books about software security and helps run Cigital, a software-security company.

Guitarist Clark Hansbarger began playing in Washington bars with the jam band Ambrose Rose, and after that, because he hated playing covers, he wrote and played originals with the Leesburg rock band, Hammer. Mike Jewell says his musical career began when his mother insisted that he join his church choir, and since those days he has taken up the drums and performed with numerous Northern Virginia bands including Genghis Angus, Nova, the James Boys and Greenbeet.

Kitselman and Hansbarger share most of the songwriting duties for the Bitter Liberals. The new group played its first show about a year after coming together, opening for James McMurtry, another childhood friend of Kitselman and Jewell in Waterford, and they have several times performed with McMurtry when he's in Virginia.

The debut album, “13,” was soon released and has been followed by a second album “Again.” The band supported both records in theaters and auditoriums throughout Northern Virginia: “No more bars, no more vineyards,” Hansbarger jokes. Adds McGraw, “We like to play in places where people are going to listen, to appreciate the craft.” The band has garnered several Washington Area Music Award nominations in the past two years as they have grown increasingly popular throughout the region.

Charles Arthur, a Richmond-based multi-instrumentalist, will open for the Bitter Liberals. Arthur served as sideman for Texas singer and songwriter Slaid Cleaves for more than a decade before returning to Virginia, where he records and plays with a variety of artists.

The Bitter Liberals perform at the Tin Pan on Friday, April 10, with Charles Arthur at 8 p.m. Tickets cost $15 in advance, $18 at door. Tinpanrva.com.