They Went, They Conquered

Veterans of Austin's South by Southwest will tell you that the now legendary festival is a marathon, not a sprint. They aren't kidding.

With an abundance of freebie adult beverages, eats, and back-to-back shows from the wee hours of the morning onward, it’s easy to overindulge quickly.

SXSW also results in the most severe cases of FOMO (fear of missing out) imaginable. Alas, you cannot do it all. Pacing and planning is key.

This year’s official roster boasted an unprecedented number of RVA artists as well as those who made the journey down in hopes of snagging an ear. Thankfully, fans of Natalie Prass, Matthew E. White and Avers received plenty of shows over the course of the festival -- and national critics took notice.

Prass entered the SXSW game as a heavyweight poised to win SXSW according to the Wall Street Journal and other notable publications. Tuesday night, the affable singer played to a beyond capacity crowd at Cheer Up Charlie's with plenty of onlookers including NPR critic and author Ann Powers pressed against a tiny side window enjoying it all from outside. 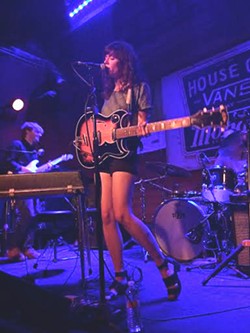 The following day’s show at House of Vans Mohawk proved to be her most memorable of the sets I saw, complete with distribution of roses to an adoring crowd and the debut of her beloved plastic Godzilla that would make several appearances later in the week. Multiple reviews and tweets noted “everyone is falling in love with Natalie Prass.” It’s not hard to do, folks.

Local guitar rock outfit Avers played about six shows ranging from a midday set at a Patagonia store to one of its last gigs at the 720 Club Patio. The latter was certainly one for the books with the raucous six-piece crammed into a sweaty dive bar with little space to move (resulting in a few smashed pieces of equipment in the end and the need for duct tape). Veteran senior editor David Fricke of Rolling Stone fame reportedly was impressed and beamed when presented with a copy of the band's debut, “Empty Light,” on vinyl. The band was visibly stoked with the good time. Since the show, Avers has been recognized as SXSW standouts by The Daily Beast, Esquire and NPR, among others.

The Richmond juggernaut continued with multiple performances by White whipping out material from his latest critically acclaimed album, “Fresh Blood,” as well as a chilled set by Butcher Brown at the historic Driskill hotel and a groove-infused evening courtesy of DJ Harrison, aka Devonne Harris, at the Container Bar. People’s Blues of Richmond, Anhayla, Blaze, and Shy, Low also represented the River City well.

Back home a few days later, exhausted players are still absorbing it all.

“Heading into the city with no place to crash then walking away feeling like we could look at each other and be proud of the shows we had played was definitely a highlight for our baby band,” says Alexandra Spalding of Avers. “It was unpredictable, wild and super addictive."