Fresh off an improvised tour of crowd work, Barry returns to his deadpan jokes.. 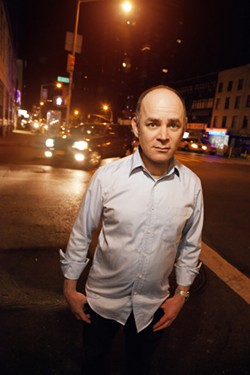 I imagine that comedians often face the same stereotyping.

The big one everybody knows is that people think comedians are all really crying on the inside. Or that comedians can or should be “on” all the time, even when they’re not onstage working.

The last time Style spoke with veteran New York comedian Todd Barry, he avoided talking about his personal life but said he “didn’t think comedians were any sadder than any other profession you could pick at random.”

Barry, 50, has forged a respected comedy career with his deadpan delivery and near perfect timing - he's often called "a comic's comic." His most recent tour, Crowd Work, featured totally improvised work onstage, where he came with no prepared bits and simply played off the audience (see hilarious video below).

An album of that West Coast tour was released by Barry fan and friend, Louis CK, on the popularcomedian’s own website. Barry is quick to note that his show in Richmond this Sunday won't be a continuation of the crowd work theme. The man with 260,000 followers on Twitter is back to delivering short and witty observational jokes, often about life on the road.

Barry grew up in Florida and started out playing drums in indie rock band the Chant before pursuing comedy full-time. Early on, you may have caught him on the animated Comedy Central series "Dr. Katz," as well as guest spots on “Sex in the City” and “Louis CK,” or as a megalomaniac bongo player on “Flight of the Concords,” or playing himself on the Adult Swim series “Delocated.” As a film actor he’s had minor roles in the “The Wrestler,” “Pootie Tang” and “Vamps,” among others.

Style spoke with him via email before his return to Richmond.

Style: Listening to your new podcast, at first your voice reminded me a little of Harry Shearer for some reason. Do you mostly just interview friends, do you find that easier than interviewing strangers? And has your own long experience with journalists taught you anything about the kinds of interviews you hope to do?

Barry: I generally interview friends, mainly because I’m most comfortable doing that, and they’re pretty easy to book. I don’t have the numbers that Maron has, so I don’t get a lot of famous people clamoring to be a guest. But people do ask. I try not to ask questions that they’ve been asked a million times, but sometimes you have to. I like it when it just seems like a conversation you’d have at lunch.

Your roast of Chevy Chase was one of my faves (to watch it, click here and go to the 15 minute mark). Had you been booked for the recent Justin Bieber roast -– any idea what direction you might’ve gone in? Most people there seemed to be using it as a promotional opportunity, which Bieber certainly was himself.

I don’t know what angle I would’ve gone for, but I really hope I can do another roast. I had a great time roasting Chevy Chase, even though I didn’t meet him until I was done roasting him.

I love hearing you weigh in on music topics. I wondered what you think of the Portland stoner rock band, Black Pussy. It recently had a show canceled in Durham at the Pour House because of protesters bothered by the name. We have a popular band here called Black Girls (also consisting of white guys), who played the Pour House just a month earlier, sans incident. Regarding political correctness -- do you think there’s too much of a knee-jerk mentality online these days with the PC police? Similarly, is it having a chilling affect on any comedians?

The PC thing affects me occasionally. I’ve had people come up to me and tell me they were offended by something I said. Often times they didn’t even listen to the joke, they just heard one word and assumed the worst. I’ve had conversations where I’ve laid out how their interpretation is wrong, but some people just want to be offended.

During the Crowd Work shows, did you notice any telltale signs on whether a person in the crowd might be interesting?

There’s no real way of knowing in advance whether someone is going to be interesting. Someone could be mild-mannered, but have great stuff to talk about if you get them started.

So many people are afraid of being publicly humiliated. You seem to take care not to destroy people live. But what do you do when you get the person who freezes like a deer in the headlights or who tries to one-up you? Is there ever a time when you would give up stage time to just annihilate some drunkard?

If I’m doing crowd work and someone freezes up, I’ll just back off. I’m really not interested in making someone uncomfortable. I’ve certainly annihilated drunks in the past, but it’s not something I want to do. I’d prefer someone like that get kicked out.

In the states that have been legalizing pot, have you noticed an increase in the quotient of stoned laughter or glazed faces in the audience?

If someone has a “glazed” face while they’re watching me, I don’t assume that they’re stoned, they could be bored or have a bad personality. Or they could just be like me, and not be that expressive. I just did a show in Denver, and I imagine a good chunk of the crowd was stoned, but it didn’t really affect the show.

So much is made of your artful delivery, which you have honed over the years. There are a lot of subtleties. Do you think it translates as well in big rooms like Carnegie or some arena?

I’ve done Carnegie Hall twice and I just opened for Louie [C.K.] at Madison Square Garden. All the shows went well. If the audience is listening, it doesn’t matter how big the venue is.

Those gigs doing voices for Disney films seem like good paychecks. With your background on Katz, and your recognizable voice, is that something you've pursued?

I’d love to do an animated movie. It’s pretty relaxed atmosphere, and they often let you improvise.

Your friend Gregg Turkington (or Neil Hamburger) has done some films (“The Comedy,” “Entertainment”) with Richmond-based director Rick Alverson. What would it take for you to be the lead in an indie film? What do you want out of your acting career in general?

I don’t really get asked to be the lead in many things. It’s usually small parts. I would do it if it was offered and I liked the project. Most of the acting jobs I get are handed to me by friends, which is great, but I’d also like to do a bigger part and work with people I don’t know.

As a germaphobe and a well-traveled performer, what are your favorite places to stay on the road in the United States and why? Any hotel chain you would rep?

I don’t really think of one city being cleaner than another. They all have soap. I wouldn’t rep a hotel, but Kimptons are pretty nice.